Helen and Helvi were both from families whose Finnish language and progressive politics informed their worldview. Helvi was born in 1915 in Wakefield, Michigan, in the Upper Peninsula. Helen was born in 1907 and grew up in Red Lake County, Minnesota. Many Finns in the Upper Midwest at this time found work in the lumber camps and the iron and copper mines. The labor was grueling and exploitative, and workers would often be exposed to dangerous conditions with no promise of a secure pension, unemployment compensation, or disability protections.

As a younger person, Helvi was deeply involved in her community. She participated in organizing events through the Young Communist League and the Finnish Workers Federation, which not only provided a social network and activities like folk-dancing troupes and plays at the Finn halls, but also was instrumental in the cooperative movement that was proliferating at the time. The co-ops were more than simply grocery stores. They often encompassed a vast consumer network in which farmers and others would organize and build a self-sustaining material world grounded in principles of economic and social justice.

Helvi worked in Superior, Wisconsin, for the Farmers and Workers Cooperative Unity Alliance in 1937. She married Matt Savola in 1939, and the two moved to Montana, where Matt worked for a period in a hard-rock copper mine. Shortly thereafter, Helvi and Matt responded to a posting in the Työmies-Eteenpäin newspaper to organize and manage a cooperative in Tripoli, Wisconsin, where they stayed and worked until 1972. 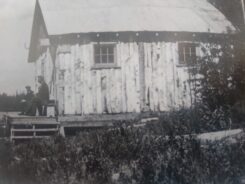 In addition to her Communist Party and co-op work, Helvi was an active member of the Mesaba Cooperative Park. In 1928 the Mesaba Range Finnish Workers Federation wanted a place to convene for camping, festivals, Party schools, and a collective gathering place. They acquired a 52-acre piece of land in Minnesota with a spring-fed lake. Helvi, Matt, Gus Hall, and many other volunteers built an access road to the park and facility structures, including a house for a children’s summer camp and a lakeside sauna (shown on the right). Helvi was known to never have missed Mesaba Park’s yearly Juhannus/Midsummer festival.

Helvi always maintained her steadfast commitment to farmers and those in rural communities. She chaired the CPUSA Farm and Rural Commission for many years until her passing. Helvi is often described as someone who lived with a clarity of purpose, a nurturing presence, and quiet resilience. One comrade described how Helvi “had a true understanding of the revolutionary process. She helped me develop revolutionary patience.” Another comrade told a story about how Helvi, when frequently confronted with bullying and discrimination for being a Communist, would reply with the phrase, “Those who would call you a Communist in a derogatory way don’t know the difference between Communism and rheumatism!”

Helen Leiviska Kruth was also instrumental in building a strong foundation for our (Minnesota/ Dakotas) district and club. From 1927 to 1934, Helen worked in the Soviet Union, particularly around the issues of farming. She spoke proficient Russian and traveled extensively, often receiving awards for her important contributions. Her opinion and analysis always garnered respect and admiration. One comrade describes a scene on a train outside Leningrad where Helen, even in her young age, had to lecture a group of disorderly male passengers, reminding them that they were in the presence of women and children and needed to model revolutionary behavior. Helen’s speech had so much impact on the passengers that when the next crew of unruly travelers boarded at the following train stop, the first group of passengers proudly repeated Helen’s speech, using equally as much profanity as when they originally boarded.

After returning from her studies and work in the USSR, Helen organized with the Young Communist League in the Minnesota/Dakotas District. Helen was known for traveling throughout the state and giving passionate speeches from her soapbox. One comrade recalled his experience in the YCL with Helen at the time: “Back in the 1930s, there used to be this Finnish girl and she would always speak on this soapbox. She was the most beautiful woman I had ever seen in my life! When the party told me that my job in the YCL was to carry her soapbox, I couldn’t have been happier to do so!”

In 1937 Helen married Mito Kruth. Mito was born in Finland and immigrated to Brooklyn when he was twelve. Around the time of their marriage, Mito fought against the Franco dictatorship in the Spanish Civil War. The international volunteers, many of whom were Communist Party members, fought in the brigades with the intent to stop the spread of fascism in Europe. In 1937 Mito sailed to Europe to serve first in the Washington Battalion and then in the Abraham Lincoln Battalion. He was shot during the war and spent several months in a hospital in Spain recovering from his war injuries before returning home. 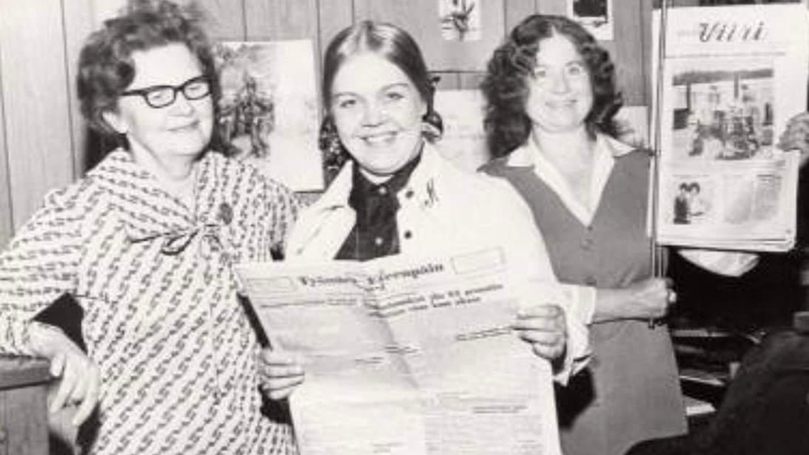 When Helen and Mito resettled after the Spanish Civil War, they lived, worked, and organized extensively in New York and in the Iron Range of Northern Minnesota, Northern Wisconsin, and Upper Michigan. During the 1970s, Helen was in charge of the Työmies-Eteenpäin newspaper, a Finnish-language newspaper published in Superior, Wisconsin. The paper was formed in 1950 as a merger of Eteenpäin (Forward) and the Communist Työmies (The Worker). The paper’s content focused on political action, labor organization, and the building of cooperatives. The socialist and unionist focus of Työmies-Eteenpäin distinguished it from many local English-language newspapers of its time. During the years that Helen worked at Työmies, the paper’s daily circulation could be as high as 15,000 copies. Helen’s dedication to the publication of a paper such as the Työmies reflects what comrades throughout our district repeatedly say about Helen: “She was a passionate orator, ahead of her time, who was courageous and spoke the truth.”

Many comrades have fond memories of Helvi and Helen during this time. One instance was at a historic gathering in 1977 at Mesaba Park to recognize Minnesota Congressperson Johnny T. Bernard. Representative Bernard, from the 8th Congressional District in the Iron Range (1937–39), was the only legislator who voted to continue to send armaments to Republican Spain. He was also famous for ensuring that the last ship carrying weapons to Republican Spain delivered its cargo by debating against the arms embargo until the ship was safely out of U.S. territorial waters. Present at this Mesaba Park event was Congressperson Johnny T. Bernard, Governor Elmer Benson, General Secretary Gus Hall, Helen, Helvi, and many veterans from the Spanish Civil War.

In the late 1970s, both Helen and Helvi lost their partners, Mito and Matt. Betty Smith, the previous district organizer, had relocated to New York. It was during this period that Helvi and Helen transitioned into the roles of district organizers for Minnesota and the Dakotas. They moved into an apartment building in the Phillips neighborhood in Minneapolis. Together, they helped write, print, and distribute the People’s Path, a bimonthly update for those in our district. At that time, our district also owned the Paul Robeson bookstore in Dinkytown, where Helen and Helvi frequently sold Marxist-Leninist literature.

Several comrades describe what it was like to work under such competent female leadership. “Even though Helen’s and Helvi’s personalities were totally different, they complemented each other in every way, criss-crossing the district, distributing literature, and organizing. Temperamentally and ideologically, Helen and Helvi fit hand in glove.”

As we near the end of Women’s History Month, our club would like to honor the tenacious legacy of our female comrades like Helvi and Helen, as well as many others in our district: Eta Furlow, Toini Mackie, Ann Flowers, Alma Foley, and Betty Smith. Thanks to their principled leadership, we can continue to engage in committed struggle and, more importantly, be reminded of the joy of doing it together.

This biography is based primarily on interviews conducted with comrades from the Minnesota/Dakotas District.