Massive anti-war rally of the KKE in Athens

Communist Party of Greece (KKE) and participated in a large anti-imperialist, anti-war rally held at Syntagma Square, in front of the Parliament.

Waving red flags and shouting anti-imperialist slogans, the demonstrators raised their voice against the imperialist war in Ukraine and expressed their firm opposition to Greece’s involvement in the dangerous US-NATO-EU plans.

The rally send a powerful message of solidarity to all the victims of imperialist war and reiterated the KKE’s position that the working people must not choose sides between imperialists, but draw an independent political strategy against bourgeois and imperialist plans.

A speech was delivered by the General Secretary of the CC of the KKE Dimitris Koutsoumbas who referred to many aspects of the imperialist conflict in Ukraine, condemning the stance of the Greek government and the other bourgeois parties for openly siding with NATO. Among other things, Koutsoumbas reminded the heroic anti-imperialist struggle of the Greek communists during the 1999 NATO bombing in Yugoslavia and underlined that “the right side of history is the struggle in every country against the war, it is the condemnation of Russia’s military intervention as well as the condemnation of those who are responsible for triggering the war, the US-NATO-EU 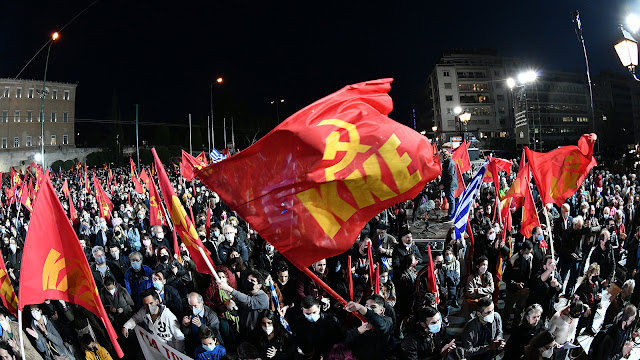 Koutsoumbas ended his speech by underlining the known slogan according to which “the actual superpower isn’t NATO, Russia or the US, but the people themselves”.

It is reminded that the KKE has officially refused to attend the Parliament’s special session on Thursday 7th April, during which Ukrainian President Volodymir Zelensky is scheduled to address the body.

Foreign Minister Sergey Lavrov’s remarks and answers to questions during a meeting with the New Horizons educational marathon participants, Moscow, May 17, 2022

Turkish and Greek communists: “USA and NATO, get out of our neighborhood”!