“Winston Churchill: His Times, His Crimes”: A review

Winston Churchill: His Times, His Crimes, by Tariq Ali, May 2022. Verso Books.

Such was my anticipation for this book, that I could not wait for the softback edition, but bought it in hardback.

Winston Churchill’s reactionary standpoints, views, actions, and crimes are far, far too numerous to log in this brief book review; but throughout his life, Churchill passionately believed in the dominion of the British Empire and the racial superiority of “Aryan stock,” and was never shy in defending and promoting both. His was the voice of white supremacy.

As Tariq Ali said, “As he saw it, and said as much, it was to the benefit of mankind that civilisation was being taken to the savages and inferior peoples” (p. 49).

There is overwhelming evidence for the above. Churchill suggested “that the Tory election slogan for the 1955 general election should be “Keep Britain White” (p. 401).

For decades, there has been a cult of personality around Churchill that, at best, sweeps the dark side under the carpet, and at worst, produces a sanitized and whitewashed version of history that is almost obscene. I personally have not watched any movie or documentary, or read any books on Churchill in two decades, because all you get is a groveling hagiography, a form of cult worship. 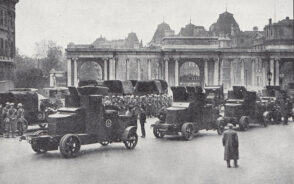 The cult of personality did not exist in his lifetime, as he was generally hated by the working class—not least for sending in the army to crush striking coal miners in Tonypandy and for using his position as editor of the government newspaper, the British Gazette, to print his anti-union and anti-socialist rants during the 1926 general strike. This explains his loss in the 1945 election, despite being the war leader.

So where did this cult come from?

Even most of the political class hated his guts, especially because his career was spent opportunistically switching between the conservatives and liberals, whenever it suited his purpose. Leo Amery, his old friend, said of him, “On the subject of India, Winston is not quite sane … I don’t see much difference between his outlook and Hitler’s” (p. 261).

Ali claims that the Churchill cult began in 1982, with Thatcher invoking Churchill to justify her own war, whose victory won her another term in office:

In the mid-1980s, the Thatcher-Reagan economic consensus required a political and cultural remodeling and a psychological conditioning in tune with the start of a new world order … as a result, numerous British documentaries, serials and films were geared for adoption by the larger market … Churchill became the daily fibre for this staple diet. (p. 8)

So, Churchill was enlisted to promote and propagandize the neoliberal counterrevolution sweeping the UK and US.

My one criticism of the book is that it is overlong. Now, putting in some backdrop, for context, is necessary. But there are entire chapters where Churchill is not involved or even mentioned. And I feel that much of this content could have been used for another book. But this is a minor squabble.

A view of Churchill from a left perspective, highlighting what others dare not mention, or at best, shove under the carpet, is a most welcome contribution about the so-called “great man” of British history. I have waited decades for this book.

Next Article Trade Union of workers in Catering, Tourism & Hotels in Attica: Solidarity to the Sri Lankan people