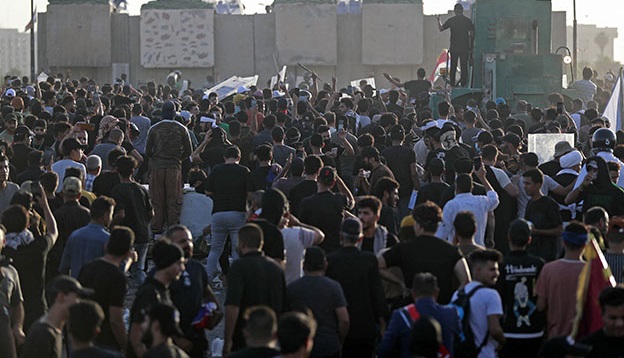 Tens of thousands of protesters flocked to squares in central Baghdad and other provinces on Saturday 1st October 2022 to commemorate the third anniversary of the October Popular Uprising (2019). The demonstrators raised banners and chanted slogans denouncing corruption, the ethno-sectarian power-sharing system, and the government measures that tried to block their way to the protest squares.

Protests had erupted on 1st October 2019, in Baghdad and Iraq’s southern provinces, against the deteriorating economic conditions, corruption, unemployment and lack of basic services. As a result of vicious repression by security forces and militias, targeting young peaceful protesters, more than 800 were killed and 20,000 injured. Dozens were also victims of enforced disappearance, and the fate of many of them is still unknown.

In Baghdad, protesters marked the 3rd anniversary of the October Uprising by gathering in large numbers in Tahrir Square and also in Nisour Square . Speakers reiterated support for the main demands of the Uprising, condemning political sectarianism and endemic corruption, and holding the ruling groups responsible for the continuing political impasse. The protests called for change, ending the ethno-sectarian power-sharing system, building a democratic civil state and achieving social justice.

The demonstrations called for ending impunity for the killers of peaceful protesters, and demanded justice for “disappeared” activists. There were also calls for banning militias and ending foreign interference in the country. Security forces fired tear gas canisters to disperse demonstrators and blocked several bridges in the centre of Baghdad.