On November 3rd, Yuri Gala López, the ambassador of the Cuban Mission to the United Nations, visited the Henry Winston Unity Hall in New York City for a screening of the documentary film Cuba in Africa by Negash Abdurahman.

The film tells the story—largely ignored in the U.S. media, education system, and history books, of the decisive part Cuba played from 1976 to 1990 in the fight for Angolan and Namibian independence, and in the defeat of the apartheid regime in South Africa.

After the film showing, the Cuban ambassador gave a speech on Cuba’s historic ties of solidarity and mutual support with the people of Africa.

The visit was hosted by the US-Cuba Normalization Committee and the Cuba Sí Coalition—organizations that have been fighting for the end of the Cuban blockade, meeting with public officials from both nations, and planning solidarity trips to Cuba—as well as the NY District of the Communist Party USA. It was a celebration for those that support Cuba’s independence and their struggle against continual U.S. attacks.

Among those that attended the screening were individuals from The People’s Forum, various Pan-African organizations, and local community groups, and the event carried an overall presence of youth internationalism.

In his speech, Ambassador Yuri Gala López emphasized that Cuba’s government has continued to prioritize people’s needs. Despite the severe economic hardship imposed on it by the blockade, Cubans continue to enjoy free, high-quality medical care and education.

As CPUSA organizer Benjamin Bath stated in his introductory remarks, “While the US spends close to a trillion dollars a year on imperialist wars of conquest and destruction, Cuba spends more than 12% of its entire Gross Domestic Product on its free, public healthcare system, and its world famous program of sending doctors around the world to build a global system of public health based on solidarity, not financial exploitation.”

Cuba’s prioritization of people’s needs does not stop at its borders. In 2020 and 2021, Cuba sent hundreds of doctors to other countries to assist in medical care at the height of the COVID crisis. In 2004, the country offered medical services to victims of Hurricane Katrina, an act of international kindness which was rejected by the United States government. At the height of the Ebola outbreak in 2014, 10,000 Cuban medical professionals volunteered to go into heavily affected countries such as Guinea, Sierra Leone, and Liberia to lend medical assistance. This is all while a US-led economic blockade continues to make basic necessities such as food and medicine difficult to access for average Cubans.

The U.S. continues to punish Cuba

Ever since the 1959 revolution, the United States has punished Cuba for choosing independence and socialism with measures explicitly aimed at choking its economy. While U.S. political leaders claim to be concerned only for the Cuban people’s democratic rights, declassified CIA documents from 1960 reveal that, from the beginning, the United States government understood Cuba’s new government, as well its leader Fidel Castro, to be hugely popular, and that the U.S. ruling class has been mainly interested “in denying money and supplies to Cuba, to decrease monetary and real wages, to bring about hunger, desperation and overthrow of [the Cuban] government.”

This policy of economic strangulation was first enacted by President John F. Kennedy and has continued ever since. A relative easing of the blockade was implemented by President Barack Obama, and Cubans began to experience significant relief, but the chokehold was once again cruelly tightened by the Trump administration, and continues to be upheld today by President Joe Biden, in tandem with the continuation of Trump’s Cold War 2.0 against China.

As shown by decades of United Nations resolutions to end the blockade, an overwhelming number of countries around the world denounce this blockade against Cuba’s economic and cultural sovereignty. Throughout the years, only two countries have voted against the resolution: the United States and Israel. Nonetheless, López’s visit to the Henry Winston Unity Hall represents a bridge connecting the struggles of the U.S. and Cuban people.

Cuban Ambassador Yuri Gala López and others spoke on why such meetings between Cuba and the United States are important. When people in the U.S. are able to hear about the successes and resiliency of the Cuban government and people, they are better able to determine for themselves what Cuba’s socialist government is really about. With better information, more might question why the U.S., a country with a $742.3-billion-dollar military budget, is unable to provide basic amenities for its citizens.

As Bath stated, “We might begin to question why college graduates are saddled with hundreds of thousands of dollars of student debt, while working people are forced to go bankrupt so they can afford dental care and insulin. Now, children and the elderly are increasingly going hungry as opportunistic mega-capitalist price-gouging drives up the cost of basic living essentials. What kind of barbaric system condemns people to such an existence? Deaths from poverty-driven despair, from alcoholism and drugs, to suicides are reaching epidemic proportions driving U.S. life expectancy down, just as Cuba’s life expectancy increases.”

The Cuban people have been able to accomplish many things in the midst of hardship because they maintain a government that values the basic needs of its people, rather than profit.

One example of this is Cuba’s new family code. A resounding 67% of people voted in favor of it in a popular referendum. The updated rules have been greeted by many as the most progressive piece of legislation centered around the family in the world. The code provides equal marriage and adoption rights for LGBTQ people, protects the rights of surrogate mothers, takes into consideration the role of grandparents, promotes the equal distribution of domestic labor in the home between men and women, extends labor rights to those performing full-time domestic work, and deals with the problems of gender-based domestic violence.

Despite the 60-year blockade, the Cuban people have continued to display a spirit of solidarity for one another and abroad. During the Angolan Civil War, 300,000 Cubans went to fight alongside the people of Angola in their fight for independence. 2,000 Cubans gave their lives in that struggle, which was also instrumental in securing the victory of the anti-apartheid movement in South Africa. 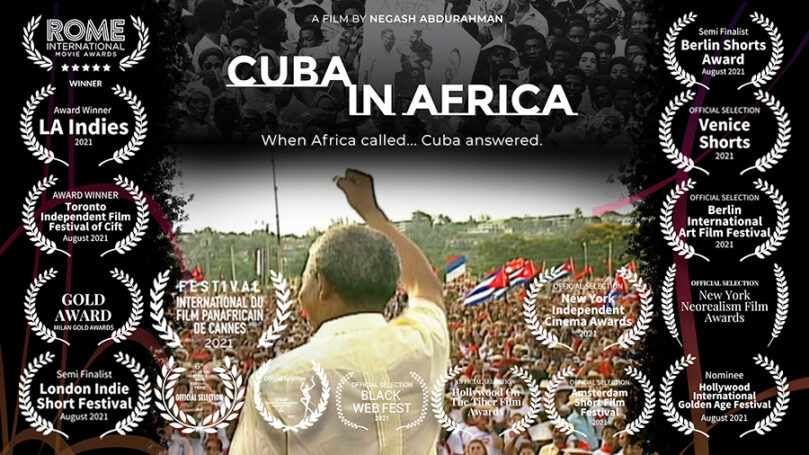 Erin Feely-Nahem, a veteran activist of the Cuba Si coalition said the film Cuba in Africa represents the courage and resilience of the Cuban people in always fighting against imperialism and colonialism.

“I am moved by the altruistic heart of the Cuban people; their courage, ingenuity, and their internationalist spirit. … Cuba’s example continues to provide the oppressed with hope, throughout the world. This is why we must continue to fight to protect her at all costs, especially now with the stepped up acts of U.S. aggression which are suffocating the Cuban economy.”

As U.S. citizens learn about the struggles and successes of the Cuban people and government,, it will help grow a broad base of support for ending the inhumane blockade, especially to the extent that we help develop a popular understanding of the right of all countries to choose their own path. This is a most basic democratic value.

Events such as the one at Henry Winston Unity Hall display the interconnected nature of the struggles between the people of the United States and Cuba, and these must continue until Cuba can definitively decide its own path forward, without the U.S. economic stronghold.