Communist Party of Brazil celebrates 100 years of struggle for socialism

The Communist Party of Brazil (PCdoB), in its 100 years of struggle, has had a rich history. Founded on March 25, 1922, the PCdoB faced many struggles in its early years. By the early 1930s, political and economic polarization in Brazil led to street fights against the rising fascists, similar to experiences in Germany around the same time. Then in 1937–45, the party faced harsh persecution during the Estado Novo dictatorship, which used the “threat” of a nonexistent communist plot to overthrow the government to crack down on all political opposition. In the 1964 US-backed coup of Brazil’s government, the PCdoB was outlawed and forced to go underground. From 1966 to 1975, a group of PCdoB militants took up arms against the coup government and, alongside anti-government mass movements, fought to restore the previous bourgeois democratic order. In 1985 the coup government was removed from power.

In recent decades, PCdoB, a member of the International Meeting of Communist and Workers Parties (IMCWP), has also been part of a coalition of left-wing parties that includes Brazil’s Workers’ Party, the Brazilian Communist Party (another IMCWP-affiliated party), and the Party of National Mobilization, which took the presidency in 2002 with Lula da Silva at the head of the ticket. The PCdoB strengthened its position in the government in 2006, when PCdoB member Aldo Rebelo, as President of the Chamber of Deputies of the Brazilian Congress, became acting President of Brazil for one day while both the president and vice president underwent medical tests. In the 2006 elections PCdoB gained seats and positions in the government in the Lula coalition. That same year, it also won its first executive position of a state capital, when it won the mayor’s race in Sergipe, capital of Aracaju.

However, due to the strength of imperialism and reaction in the 21st century, the nature of bourgeois parliaments and governments, and a number of unfortunate events, the Lula coalition took a series of heavy blows, which eventually led to the election of fascist-leaning Jair Bolsonaro in 2018.

Notably, however, the opposition candidates running for President and Vice President, Fernando Haddad (Workers’ Party) and Manuela d’Ávila (PCdoB), respectively, got 45% of the vote against Bolsonaro. This is a significant achievement for a communist candidate in a national election. Further, with hundreds of thousands of members in its ranks, the PCdoB is the second-largest non-ruling communist party in the world. The PCdoB continues their struggle as the contradictions escalate in their country and around the world.

International panel: A century of struggle for a socialist world in solidarity

In celebration of their 100th anniversary, the PCdoB held its Festival Vermelho, or Red Festival, this year. This included an online international panel held on March 26 with the theme “A Century of Struggle for a Socialist World in Solidarity.” Several parties affiliated with the IMCWP participated in the panel. These included the communist parties of Vietnam, India (Marxist), South Africa, Portugal, Chile, Peru, Uruguay, and Spain.

Several non-IMCWP parties attended, such as Mexico’s MORENA, Bolivia’s MAS, Angola’s MPLA, and Venezuela’s PSUV, among others. Nicaragua’s FSLN presented a video to share their greetings and congratulations to PCdoB. Brazilian parties with relations to PCdoB also participated. 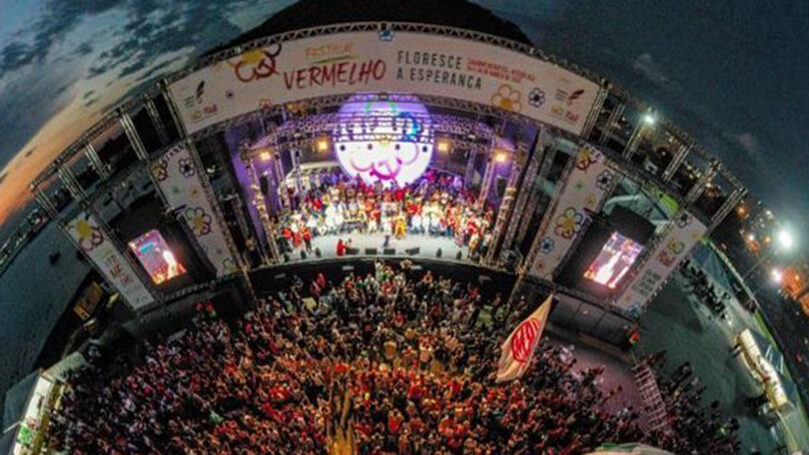 Celso Amorim, former Minister of Foreign Affairs under President Lula da Silva, spoke at the panel. Amorim, a member of Brazil’s social democratic Workers’ Party, which PCdoB formed a coalition with during the Lula presidency, discussed the need to expand the struggle against the far right and imperialism both domestically and internationally. Amorim said that the extreme right in Latin America is “an international movement. It’s not a fight that we can limit to a country. It is a much broader, much more complex fight, which is extremely difficult and that makes use of means whose confrontation is not easy. We need a great democratic front to face and defeat these segments.”

Amorim also discussed his disappointment with the progressive and social democratic forces in countries across Europe and other regions siding with NATO and imperialism. The Progressive Alliance, which Brazil’s Workers’ Party is a member of, has been supportive of the imperialist, pro-NATO, anti-Russia campaign that has been building momentum over the course of the crisis in Ukraine.

A number of social democratic parties in Europe and members of the Progressive Alliance have called for not only more sanctions on Russia but also increased military budgets across the European Union to fight Russia. The Progressive Alliance has also started a new podcast series call Peace and Security Podcasts, which calls for a “holistic approach” to security that includes “military and police” as well as economic and ideological tools.

However, Amorim seemed to find hope in some of the social democratic forces outside the West, in countries that have long been the victims of US-backed coups, interference, sanctions, and other forms of coercion and manipulation. These forces are more hesitant to accept the imperialist position that social democrats are promoting in NATO-affiliated countries and across the West. He also pointed out that parties such as PCdoB have consistently held an anti-imperialist position and fought for the self-determination of all nations, saying, “[The PCdoB] has always been, for Brazil and the world, a force in defense of peace and self-determination of peoples.”

This potential split in the Progressive Alliance and social democratic movement more broadly reflects similar developments which took place in the Second International early in the 20th century. Lenin and other leaders who would go on to form the Third International were disappointed in their social democratic counterparts in Europe for siding with their national bourgeoisie during the First World War rather than opposing the imperialist war. Today, we see social democracy and its proponents repeating the same mistakes, this time supporting imperialist aggression in the form of U.S.- and NATO-backed forces. Once again, it is the communist parties of the world condemning imperialism and fighting for true peace.

Capitalism and imperialism as the greatest threats

A key theme throughout the panel was the message that capitalism and imperialism are the greatest threats to world peace, shared prosperity, and a better world. Karol Cariola, Communist Party of Chile member and future Speaker of the Chilean Congress’s Chamber of Deputies, put this most succinctly when she said, “Capitalism is, in essence, the greatest scourge facing humanity in our time.” Other speakers echoed these sentiments.

The panel outlined two contrasting trends developing today — on one hand a coalition of neoliberals, conservatives, fascists, and other imperialists supporting the capitalist order and on the other hand the growing communist, workers’, and progressive anti-imperialist forces who are working for a peaceful, sustainable, socialist world. As pointed out by several speakers, in today’s age capitalism and imperialism are an international threat. This means that, to effectively combat it, the various communist, workers’, and anti-imperialist forces must also be oriented toward internationalism and work together toward their shared goals.

As far back as the founding of the very first communist parties, internationalism has been a key theme in the communist movement. But internationalism and international solidarity are not just slogans or talking points; they are the actions that we take to build relationships across borders and to share the struggles we all face.

It’s crucial that we as communists continue to strengthen our international relationships, especially in light of the rapid shift in the geopolitical landscape instigated by the Russia-Ukraine crisis and the West’s response to it. As Lenin famously said, “There are decades where nothing happens and weeks where decades happen.” The contradictions of the imperialist unipolar world are heightening, and it is more important than ever that we strengthen our bonds of international solidarity and communist internationalism.

The panel discussion can be viewed here. The PCdoB article (in Portuguese) on the panel can be read here.
Images:  Lula da Silva and Luciana Santos, photo by Ricardo Stuckert, PCdoB website; Festival Vermelho, PCdoB website.