Last night was a significant defeat for the MAGA crowd, with many Trump-supported candidates losing their elections. Congratulations! With a few important exceptions, it appears that the big conclusion from Tuesday’s midterms is that the people’s coalition that sent Trump packing two years ago looks to triumph once again — the anti-MAGA majority is prevailing. Indeed, the much-vaunted Republican wave failed to materialize as key extreme, election-denying Trump-backed MAGA candidates went down to defeat. Without a doubt, a key issue driving turnout was abortion rights. Led by a huge surge of working-class women, African Americans, Latino, Asian and youth voters, democracy, while remaining severely challenged, secured a second electoral wind.

The exceptions are important. Across the country over 200 elections deniers won office. If current trends continue, the GOP may have won the House by a very slim margin, though importantly it appears that the Democrats will continue to control the Senate. The result: continued gridlock in Congress and a stalled presidential agenda. Control of the House will enable Republicans to hound Democratic officials with innumerable investigations and hamstring efforts to prosecute the leaders of the January 6th insurrection. Trump’s likely coming announcement of another presidential bid will be an important backdrop to these developments, and Tuesday’s results will certainly impact how his fascist-minded backers will pursue the race, should he decide to run.

Many of the right-wing victories are attributed to the weakening of democracy, through extremely gerrymandered districts in Florida and Louisiana (approved by the Supreme Court this summer); billions of corporate dollars flooding campaigns, even for state legislation and school board races; and the usual but rising racism, anti-Semitism, misogyny, and anti-trans hatred.

On the other hand, the victories of Democratic senators, governors, and secretaries of state in important swing states like Michigan, Minnesota, Arizona, Wisconsin, and Pennsylvania will likely forestall GOP maneuvers to hijack voting rights with likely big implications for the 2024 presidential election. 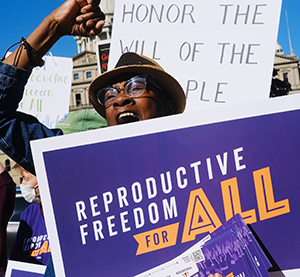 The wins of progressive ballot initiatives will slow the right-wing as well. Reproductive rights have been voted into the constitutions of three states — Michigan, California, and Vermont — while Kentuckians rejected an anti-abortion measure. Illinois voters said yes to enshrining workers’ rights in the state constitution. These victories were driven by more democracy, not less, as women and especially youth voted in higher numbers. Millennials and GenZers, who tend to vote Democratic, will likely be the largest voting block in 2024, representing a huge generational and ideological shift.

Clearly both the price of gas along with the cost of freedom weighed heavily on the minds of midterm voters. But just as clearly a majority rejected a narrow calculus and understood that nothing can be valued over reproductive and voting rights. At the same time the cost of living, gun violence, and the environment cannot be ignored. So too with the Biden administration’s Cold War 2.0 foreign policy. Key to moving forward is rejecting the GOP’s use of red baiting, racism, and anti-LGBTQ demagogy to marshal and expand its base.

But progress on these issues is impossible without mass grassroots movements demanding redress — that’s what’s gone missing in the past two years, including this election season. The ongoing potential of these movements was indicated by the energy and excitement of end-of-campaign rallies in Pennsylvania, Wisconsin, and other states. But don’t hold your breath for the powers that be to organize them.

Women’s, civil rights, and union organizing efforts made the difference in the midterms and will be the difference between defeat and victory over the fascist danger going forward. CPUSA initiative and candidates must be a big part of this mix. Let’s start to make plans now, and, in doing so, let’s unite to defeat the right!