Stop the War! Give Peace a Chance! – Street Actions in Portugal

In Lisbon, Porto, Viseu, Évora, Santarém and Couço, on March 10, the Portuguese Council for Peace and Cooperation organised several street actions, gathering hundreds of people all over the country, under the theme „Stop the war, give Peace a chance“. They reaffirmed the pressing need to put an end to the escalation of the conflict, promote dialogue and negotiations, reach agreements that serve the interests of peace and cooperation among peoples!

Stop the War!
Give Peace a Chance!

Concerned with the situation of war in Ukraine, which has repercussions all

across Europe, and aware that there are risks that could have

consequences for all Humanity, men and women citizens must

make a stand and launch this appeal.

War cannot be a solution to the conflict and is not, in any case,

the path that is required to achieve peace.

In this regard, the signatories:

-call for an end to the war in Ukraine and the holding of negotiations,

to find a just and lasting agreement, in the interests of the peoples;

-demand, in addition to the immediate cessation of fighting in Ukraine, a stop to

the continuous increase in military forces and arms in the East

of Europe, a situation that tends to place the interests of war over those of peace,

-emphasize that sanctions should not replace diplomacy because, first and foremost,

both of those who suffer them and those who impose them;

-repudiate all forms of fascism, Nazism, xenophobia, wherever they

-view as essential and urgent the creation of agreements and

mechanisms of dialogue that guarantee the establishment of a climate of

peace, confidence and security for all the countries and peoples of Europe and the

– call on the Portuguese authorities, in the light of the Constitution of the

Republic, not to contribute to the worsening of the conflict, of militarism,

war, and to take an active and committed part in the search for just,

international law is the essential path to justice, security, respect

for peoples‘ rights and peace.

Intervention of the Portuguese Council for Peace and Cooperation

Stop the War! Give peace a chance!

We are here, in this important and necessary action – at this very moment, as are many others, in various parts of the country – calling for an end to the war in Ukraine and for peace to be given a chance.

And giving peace a chance requires, immediately, the suspension of the fighting and the guarantee of humanitarian aid to the populations, to the refugees.

These are urgent, fundamental measures. But insufficient.

We must also put an end to the escalation of the conflict, promote dialogue and negotiations, reach agreements that serve the interests of peace and cooperation among peoples – between the Ukrainian people, the Russian people, all the peoples of Europe and the World!

The war in Ukraine did not begin a few days ago, with the Russian military intervention in this country. It has been going on since 2014, having caused around 15,000 deaths, suffering and destruction in the Donbass region in the last eight years.

The conflict in Ukraine has long stepped out of the framework of international law and it is crucial that it returns as quickly as possible.

You cannot put an end to war by insisting on the path that led to it. War, militarism, confrontation is not the path to achieve peace.

We must demand an end to the propaganda of war, to the incitement of hatred, to inflammatory measures that pour more fuel into the fire, encouraging the continuation of the war, at the cost of the loss of more human lives.

We must denounce the hypocrisy of those who have long been promoting confrontation, conflict and war in Ukraine, and who are now trying to conceal their great responsibilities.

Those same who, under the pretext of a war they encouraged and continue to fuel, are now launching themselves into the colossal increase in military expenditure, the intensification of the arms race, militarism, the business of war.

Those same who, under the pretext of a war that they encouraged and continue to fuel, fill the pockets of profiteers and large economic groups with billions of obscene profits.

The war must stop! Peace must be given a chance!

A lasting peace will only be possible by blocking the path of militarism, the enlargement and strengthening of political-military blocs such as NATO, and the increase in its military forces and arms in Eastern Europe.

A lasting peace will only be possible by restoring arms control treaties and agreements, abandoned one after another in recent decades. Following the path of dialogue, of détente, of disarmament.

There is an urgent need to open a broad and participatory debate on the security architecture in Europe, based on guarantees of mutual security, peace and cooperation.

The peace, just and lasting, that we want to give a chance also requires the rejection and repudiation of all expressions of fascism, Nazism and aggressive nationalism.

Peace, cooperation and friendship among the peoples of Europe must prevail in the face of artificially created divisions and confrontations and the business of war, expressions of criminal and obscure interests that are not those of the peoples.

Portugal must play an active role in building peace.

In this as in other matters, we urge the Portuguese Government to assume a sovereign stand in defence of peace, and not the stands in tow with the warmongering policy of NATO, the US, the European Union that led us here.

We call on the Portuguese government to stop aligning itself with those who bet on the eternalisation of the conflict, on the continuation of the war, on the aggravation of tensions.

It is the Constitution of the Portuguese Republic that must determine Portugal’s position.

And it is this Constitution that, in its Article 7, defends the peaceful solution of international conflicts – and not the escalation of war;

It enshrines non-interference in the internal affairs of other States – and not the promotion of coups d’état and support for xenophobic and fascist forces.

It demands the dissolution of political-military blocs – and not the strengthening and growing warmongering by NATO, increasingly established along Russia’s borders;

It points to cooperation among peoples for the emancipation and progress of humanity – and not the exacerbation of differences and divisions based on nationality, language, ethnicity or religion.

The Constitution of the Portuguese Republic, an expression of the aspiration and conquest of peace by the Portuguese people in the April Revolution, aims at general, simultaneous and controlled disarmament – and not at the arms race.

These actions of ours today are not the beginning of a path, as they are not the end. We fight for peace and we will continue to do so – with determination, confidence and courage. As always, we reject the hypocrisy of those who, falsely speaking of peace, incite confrontation and war.

We will insist that the solution to this and other conflicts lies in abiding the principles enshrined in the United Nations Charter and in the Final Act of the Helsinki Conference. In a path of justice, security, respect for the rights of peoples and peace.

This is the path that we must continue to follow. 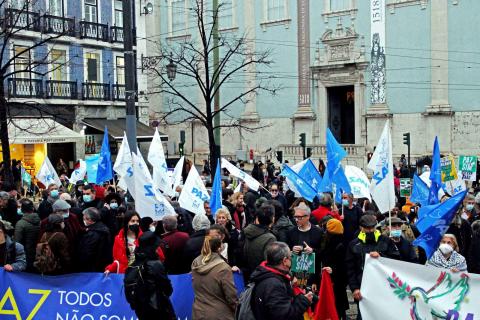 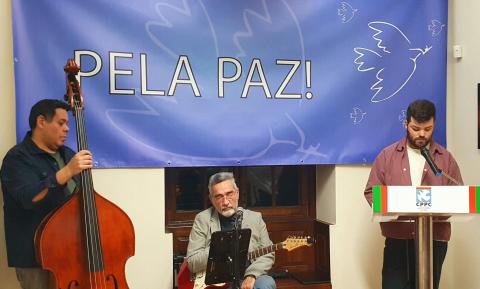 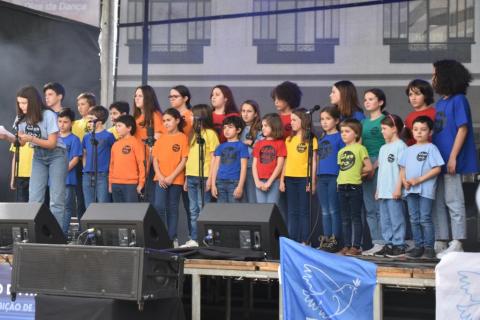 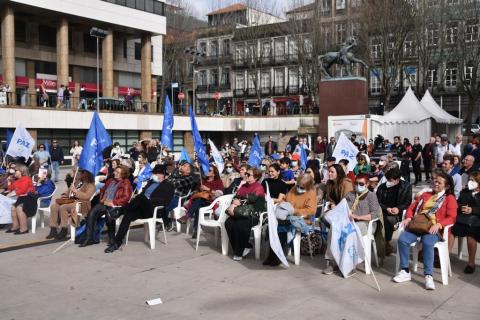 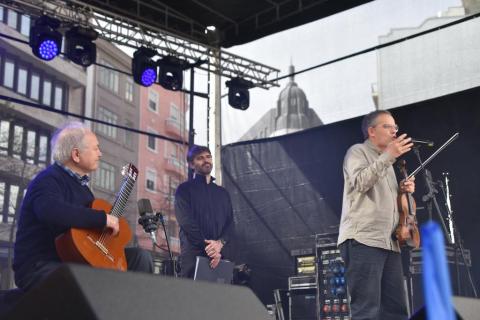 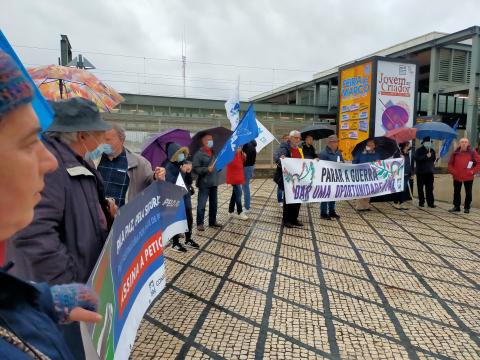 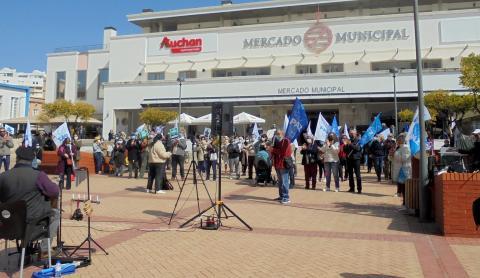 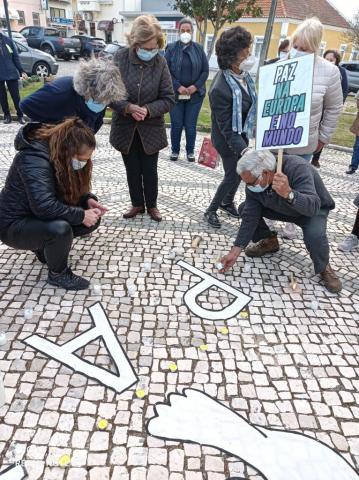 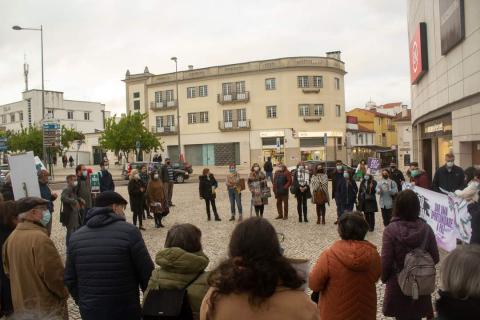 Portuguese Council for Peace and Cooperation 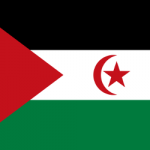