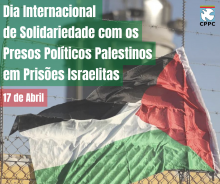 Since 1974, April 17 marks an international day to express solidarity with Palestinian political prisoners who remain in Israeli prisons.

There are thousands of Palestinian political prisoners, including minors, who are jailed in Israeli prisons, many of them under so-called administrative detentions – arbitrary detentions, issued by the Israeli military and approved by its military courts, which can be continually renewed, imposing years of imprisonment without charges or trial.

Despite being detained, Palestinian political prisoners take part in the resistance of the Palestinian people, carrying out courageous struggles denouncing disregard for their rights and the violence they are subjected to, including through hunger strikes, jeopardising their health and even life.

The Portuguese Council for Peace and Cooperation (CPPC) denounces the detention of Palestinian political prisoners by the Israeli authorities, the denial of their most basic rights, including the right to trial, the situations of humiliation and torture, the renewal of administrative detentions – yet another blatant example of Israel’s disregard for international law.

On the International Day of Solidarity, the CPPC calls on all Peace lovers and defenders to demand the release of Palestinian Political Prisoners in Israeli Prisons, an end to Israeli repression and occupation, and the implementation of the right of the Palestinian people to their independent and sovereign State on the pre-1967 borders and with its capital in East Jerusalem, the right of return of Palestinian refugees as enshrined in United Nations resolutions.

Portuguese Council for Peace and Cooperation

WFTU statement on the 74th anniversary of Nakba Day

End the Israeli occupation – Solidarity with the Palestinian people!