Oklahoma’s extreme anti-abortion law threatens all of us

On April 5 the Oklahoma legislature passed a near-total ban on abortion in the state. Most people with whom I’ve spoken are unsurprised that our reactionary law-making body (made up of 82 Republicans and 19 Democrats) would move to outlaw abortion. Some people were, however, caught off guard by the suddenness of the move, which came unannounced while pro-choice demonstrators gathered outside the state legislature in Oklahoma City. The “Bans Off Oklahoma” rally was organized by Planned Parenthood and other allies supportive of reproductive rights. It appears that Republican legislators intentionally timed the bill’s passage as an “in your face” gesture to those rallying outside. The bill was passed overwhelmingly, by a vote of 70 to 14.

This bill would subject anyone who performs an abortion to up to 10 years in prison and up to $100,000 in fines. It is one of the most extreme anti-abortion bills passed so far, effectively criminalizing abortion at any stage of pregnancy, with the only exception being “to save the life of a pregnant woman in a medical emergency.” There is otherwise no exception for the health of the patient, and there is no exception for rape.

“Pro-life,” for the governor, does not extend to opposing capital punishment.

The extreme-right Governor Kevin Stitt has promised to sign any anti-abortion legislation that reaches his desk. Stitt has declared himself the “most pro-life” governor in state history. “Pro-life,” for the governor, does not extend to opposing capital punishment, and he has been busy reviving the state’s death row machinery. (Oklahoma rivals Texas as a leading executioner in the nation, but prior to this year had not executed anyone since 2014, when a botched execution left Clayton Lockett writhing in pain, before finally succumbing to a heart attack, in what many described as de facto “torture.”) Nor does his “pro-life” posture extend to public health measures to protect us from Covid, which he adamantly opposed, leading to Oklahoma having the highest pandemic death rate of any state in the nation in 2021.

Oklahoma has been referred to as the “buckle of the Bible Belt,” and religious fundamentalism is indeed stronger here than in most parts of the country, with 66% of Oklahomans identified as “highly religious” according to a study by the Pew Research Center. Nevertheless, also according to Pew, 51% of Oklahomans are pro-choice (believe abortion should be “legal in all/most cases”). One should not make the mistake of viewing this as an isolated piece of repression unique to our state. It comes as part of a wave of anti-choice legislation sweeps GOP-led states across the country, ahead of the likely overturn of Roe v. Wade this summer. Indeed, neighboring Texas received national attention in passing its own abortion ban into law last September. According to the ACLU, nearly half of the patients currently seeking abortions in Oklahoma come from Texas.

The Texas law evades judicial review by placing enforcement in the hands of citizens empowered to sue others in civil court for receiving or performing abortions, thereby removing state officials and government bodies as targets from any potential legal challenges on constitutional grounds. Outrageously, the Supreme Court allowed the state to get away with this “vigilante” enforcement mechanism, potentially opening the floodgates for other states to enact similarly unconstitutional legislation using the same means. The Oklahoma law differs from the Texas law in that it does not include the same civil court means of enforcement, but rather imposes criminal penalties outright.

The new anti-choice law is certain to face legal challenges, as it is in clear violation of federal constitutional protections guaranteed by Roe. Previous efforts such as this one have been overturned in the courts, but this time may be different, as it is widely anticipated that the current Supreme Court, packed with reactionaries by former President Donald Trump, will soon overturn that landmark 1973 ruling. 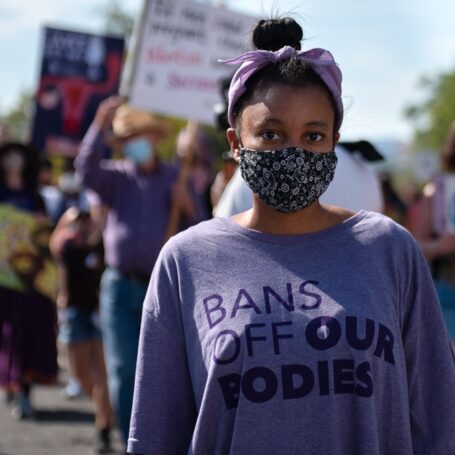 It remains to be seen how much of a boost such repressive rulings from SCOTUS will give to the already rising demands for reform of the nation’s highest court, including calls to increase the number of judges, as well as possible term limits to the judges who currently serve for life. Many might question what it says about the state of our “democracy” that five of the nine current justices were appointed by presidents who lost the popular vote. George W. Bush, who made two appointments to the court, and Donald Trump, who made three, both became president while receiving fewer votes than their opponents, thanks to the nation’s archaic Electoral College system, created as a concession to Southern slaveholding elites at the time of the nation’s founding. (In fact, the twice-impeached, one-term president Trump not only never won the popular vote; he never polled majority approval for a single day during his entire term in office.)

It has been widely noted that, at least for the foreseeable future, the wealthy and privileged will still find the means to exercise control over their reproductive choice. It is generally assumed that states with Democratic majorities will continue to allow women to exercise their right to decide whether to bring a pregnancy to term, and those with the means will simply take a vacation, but many working-class and poor people may not have that option.

Also, it may be ill-advised to assume that such reactionary legislation will be restricted to red states. Certainly, the so-called pro-life forces will not be satisfied with only outlawing abortion in red states. They will likely advance their legal argument beyond merely the “states’ rights” and “originalist” arguments being currently advanced and make the case that the fetus is entitled to “citizenship” protections under the 14th Amendment. If the courts were to rule on 14th Amendment grounds, that would make abortion illegal nationwide. And, of course, another path to the same effect would be federal legislation to ban abortion in the case that the GOP were to retake the Congress and White House.

The real victims of all such reactionary legislation will be low-income and working-class Americans who cannot afford the exorbitant costs involved with traveling out of state for what is actually a very simple, safe medical procedure (which is, in fact, safer than giving birth). It must be viewed as part and parcel of the ongoing fascist and reactionary threats posed to our fragile democratic order by a two-party political system in which one of the two capitalist parties has turned fully against basic democracy and civil liberties, even to the extent of embracing violent insurrectionists, as recent events have shown.