The crypto craze is a mania currently. Bitcoins are cryptographically unique and complex computations that cannot be copied and were designed for removing bank intermediaries from verifying and recording (making a ledger for) internet transactions. They are used for very few transactions so far. So the craze is all speculation — a “claim” or a “gamble.” The discussion below owes much to Mike Roberts’  Next Recession blog, an outstanding Marxist economic resource.

The bitcoin gamble is a new feature in an old category of finance that Marx called ”fictitious capital.” Stocks, bonds, and their tradable derivatives are also fictitious capital. They are backed by no actual, only future, real production and delivery of value in the form of money, or commodities. Marx wrote, “The formation of a fictitious capital is called capitalisation.” It is the source of the credit system. It represents a claim to property rights or income. Such claims can take many forms, for example, a bank note or loan, a claim on future government tax revenue, or a claim issued against a commodity (such as next year’s harvest, or a Bitcoin) that remains, as yet, unsold.

While the bitcoin gamble, or share of company stock, may be fictitious, the very non-fictitious cash raised by the sale of fictitious capital is real capital, gathered from diverse gamblers. This capital may then be used by the company to generate more production, and more profits from the sale of goods or services. But once this capital is set in motion, the claims held by the shareholders and others are simply “marketable claims to a share in future surplus value production.” The stock market and bitcoin market are, as Marx writes, “a market for the circulation of property rights as such.” Thus it is only indirectly related to real economic growth.

An argument often heard in defense of stock markets is that, by creating a casino of property rights, somehow a more “efficient” allocation of capital is achieved. The experiences of the dot.com bust of 2000, the mortgage bust of 2008, and the recent pandemic bust should be enough to rebut this defense, but there are times when common sense and intuition are at war with the truth. There is a relationship between a share price of stock and the actual value of a company. It is a second-order relationship, the relationship of an expected future value to current value. However, financial markets are not restricted to stock, but expand in numerous other derivatives of stocks or bonds. With each level, with each “gamble” on another class of “gamblers’ notes,” the remoteness of the value from the original fictions increases. 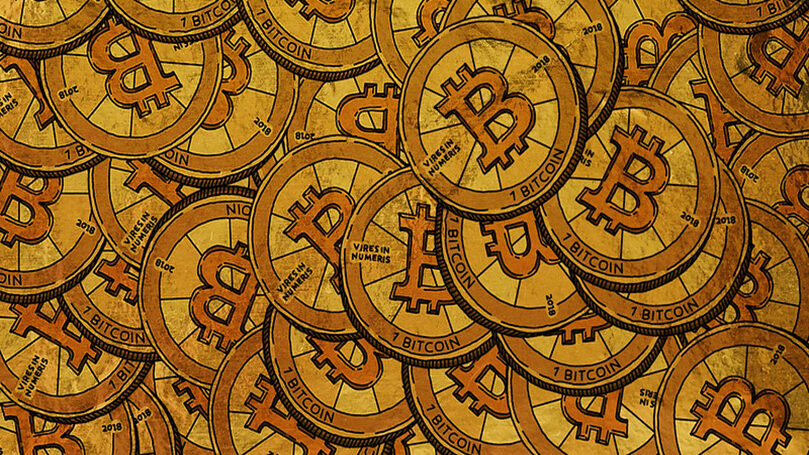 Bitcoins, backed by absolutely nothing, are a new advance in remoteness from actual value. Raising stock to build a new semiconductor factory might be productive. Raising stock to invest in Bitcoins, as Bill Gates remarked, is only something a billionaire should attempt. Bitcoins are created as a reward for a computational process known as mining. They can be exchanged for other currencies, products, and services, although the process is not trivial. Bitcoin has been criticized for its use in illegal transactions, the very large amount of electricity (and thus carbon footprint) used by mining, price volatility, and thefts from exchanges.

The large energy requirement to scale up use of Bitcoins will virtually guarantee the mining will be captured by large corporations. And that is the toughest rebuttal to claims that the decentralized transactions can lead to a post-capitalist new economic system. Crypto advocates point to eliminating bank intermediaries as an advance for freedom because transactions are much harder, at least for now, to regulate. There is a single Bitcoin ledger, publicly available, and maintained by a mysterious person or group of people using the name Satoshi Nakamoto. Although the trades in Bitcoin are publicly visible, the traders’ identities are only identifiable forensically, if at all, unless the traders possess and use a Bitcoin Wallet. The wallet is currently difficult to obtain and use. The ledger is critical because it can be used to verify Bitcoin, a process which currently takes about 10 minutes to complete but depends on the services of other Bitcoin miners.

Many governments are considering creating central bank–backed digital currencies. The advantages of faster decentralized accounting, less price volatility, and fewer intermediaries in transactions could put more control over the circulation of currencies in the hands of the government, which would maintain the ledger of chained transactions of a brand of digital coin. That of course would make the government a record holder of all such transactions, which are easily built into profiles. This latter consideration is likely behind Federal Reserve Chairman Jerome Powell’s stating “that there’s no hurry to develop a central bank digital currency.” Having trashed cryptocurrency as “highly volatile and therefore not really useful stores of value and not backed by anything,” Powell went on, “It’s more a speculative asset that’s essentially a substitute for gold rather than for the dollar.”

Those who hope cryptocurrencies are an escape path from the domination of finance capital are likely to be disappointed. Mike Roberts says it well:

Capitalism is not ignoring blockchain technology. Indeed, like every other innovation, it seeks to bring it under its control. Mutual distributed ledgers (MDLs) in blockchain technology provide an electronic public transaction record of integrity without central ownership. The ability to have a globally available, verifiable and untamperable source of data provides anyone wishing to provide trusted third-party services, i.e., most financial services firms, the ability to do so cheaply and robustly. Indeed, that is the road that large banks and other financial institutions are going for. They are much more interested in developing blockchain technology to save costs and control internet transactions.

If the expanse of digital currencies does advance, expect the divisions between investment and commercial banks to weaken further.