As the organization points out in its call to the march, even before the coronavirus pandemic, 140 million people in the U.S. were just one emergency away from economic ruin. Since March 2020, hundreds of thousands have died and millions more were pushed to the edge of hunger and eviction. Too many still lack health care and are not paid a living wage, even as billionaire wealth soared by over $2 million during the COVID crisis.

From the west coast to the east and at all points in between, issues like those are pushing people to sign up and join in the organizing. And they’re bringing co-workers, family, friends, and neighbors with them to nation’s capital. The massive march will occur, appropriately, on Juneteenth weekend, which celebrates the democratic revolution that ended slavery and established Black Reconstruction in the South.

“Over 1,000 people from Los Angeles joined the Poor People’s Campaign for a launch event we had downtown on May 16,” Rossana Cambron, a national co-chair of the Communist Party, told People’s World. “I belong to the Policy and Education Collective, which provides study sessions for the campaign’s Jubilee Platform.” 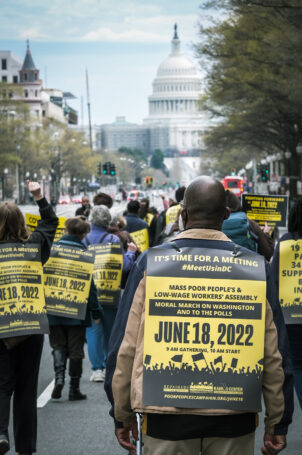 Co-chaired by Rev. William J. Barber II and Liz Theoharis, the Poor People’s Campaign began in May 2018 with 40 days of coordinated action at statehouses across the U.S. to confront systemic racism, poverty, ecological devastation, militarism, and the war economy.

“After the L.A. action, we had a fundraiser, and raised over $9,000 to send people from Southern California that wanted to go to D.C. but were impacted by poverty,” Cambron said. She described readings of MLK’s “Beyond Vietnam” speech at universities and other community actions up and down the state. “There’s been actions for tenant rights and immigrant rights. Unions have been involved, including UFCW, SEIU and the #Fightfor15, the car wash workers, and clergy from different denominations.”

Steve Noffke, a member of the Michigan campaign’s Coordinating Committee, said there are 120 people signed up in his area for the 15-hour bus ride to D.C. The Michigan campaign has connections with the People’s Water Board and the General Baker Institute, “named after a very pro-left-wing auto worker,” Noffke adds.

“The Poor People’s Campaign is active on issues, especially around clean water for Flint, and we’re starting to see some of the housing groups are organizing.” For the People’s Water Board, the drinking water crisis in Flint was a big catalyst. “The former governor opened up the floodgates for lead to be going into people’s homes. Rather than buying clean water for the people to drink, they went with the cheaper, dirtier water from the Flint River.”

For more than a century, the major capitalist industries in Flint used the river as a toxic dumping site—leaving the mostly Black working families in the area with nothing to drink. “General Motors won’t even use their water,” Noffke said.

“From my point of view, another big issue is voter suppression,” he argued. The Michigan campaign conducted a letter-writing effort against 39 voter suppression bills put forward by the Republican-controlled Michigan legislature.

The bus from Michigan is just one of at least 250 planned across the U.S., and hundreds of union, faith, peace, and environmental justice groups are partners in the D.C. effort, including the AFL-CIO.

The Communist Party USA and Young Communist League Organizing Collectives around the nation are also building what they hope to be a big contingent for the national mobilization. Party members from North Carolina to Texas, California to Maine, and from New York, Chicago, Philadelphia, and Detroit have all committed to be in the nation’s capital.

“Through this time of so much catastrophe, it’s been very hopeful to be able to bring people together to say, ‘Here’s this positive thing that we can do,’” Ohio CPUSA activist Molly Nagin says. “Whether around racism or housing, low-wage workers, healthcare, or the shootings and the way they want to arm teachers, what the Republicans and extreme right are doing right now to this country and have been doing is at a boiling point.”

Nagin has been helping mobilize for the action with local church congregations, a re-entry organization working with people coming out of prison, and a disability rights organization called Breaking Silences.

“I’ve seen it a few times now, that as soon as I mention the march on Washington, the whole collective can get back to work, and there’s less of that depression, overwhelmed, exhaustion mode. It becomes more of ‘Okay, we’ve got something to do.’”

The Poor People’s Campaign is working to continue and build on the legacy of Dr. Martin Luther King, Jr., who was instrumental in bringing together the labor and civil rights coalition that defeated key planks of the Jim Crow counterrevolution. Then, as now, the forces of democracy and of the extreme right were in sharp confrontation.

“We have … come to this hallowed spot to remind America of the fierce urgency of now,” King declared at the 1963 March on Washington. “Now is the time to make real the promises of democracy.”

To that end, two buses from New Haven, Conn., are booked to leave for D.C. The New Haven People’s Center is partnering with Unite Here Local 34 and SEIU 1199NE to represent the struggles unfolding there, issuing an invitation to young people and everyone to participate. During the COVID crisis, many unions and community and faith groups have organized for pandemic pay, better work schedules, measures to improve conditions for low wage workers, to legally restrict anti-union “captive audience” meetings, and to tax the rich and move funds from military to human needs.

The battle between militarism and people’s needs also characterized the demands of King’s original Poor People’s Campaign. Even though gains like the Voting Rights Act, the Civil Rights Act, anti-poverty “Great Society” legislation were won, almost immediately the U.S. war against Vietnam was escalated, sucking up public money. That’s when King increasingly began to highlight the connection between racism, poverty, and militarism.

“It seemed as if there was a real promise of hope for the poor, both Black and white, through the poverty program,” he said in 1967. “Then came the buildup in Vietnam, and I watched this program broken and eviscerated.”

“That’s what will happen to Build Back Better as a result of the billions being spent sending weapons to Ukraine,” warns Matthew Weinstein of Brooklyn for Peace (BFP). His organization has dedicated two Saturday mornings this month to leaflet in Brooklyn’s Grand Army Plaza for June 18.

“We’ve been working hand in glove with the Poor People’s Campaign. It appealed to us because they don’t skirt around the issue of militarism and war.” As part of the Move The Money coalition, BFP is pushing for a city council resolution that would put New York on record opposing the bloated military budget.

In April, the anti-war coalition participated alongside SEIU 1199, Citizen Action, the United University Professions, the Islamic Center of North America, Physicians for a National Health Program, and others in a march through Wall Street culminating in a community meeting at Trinity Church. There, NYCHA resident Brenda Temple, an activist with the Committee for Independent Community Action, spoke about the need to invest in public housing.

However, “actions are one piece of what we do,” Kelly Smith told People’s World. Smith is one of three New York State campaign chairs, and organizes in the NYC region with a big focus on faith communities. The other chairs organize in different parts of the state, including Buffalo, where Poor People’s Campaign activists supported vigils held in the wake of the racist massacre there. “A lot of our work is organizing and working with other groups, learning, doing political education, and canvassing.”

The New York Poor People’s Campaign supports the housing movement and efforts to pass the N.Y. Health Act, a bill for statewide universal healthcare. “At the same time, we’re looking at mass incarceration issues, cash bails, and ecological devastation,” Smith adds. “When we say militarism, we mean that from a national and war framework, and also [the militarization] of our communities, especially Black and brown communities.”

Legislation to help working class and poor people has faced formidable enemies over the past several years. The racist Tea Party reaction gridlocked Congress during most of Barack Obama’s presidency, and then helped bring Trump to power.

But there’s also been a broad democratic and left-wing struggle that has formed to push a democratic agenda forward — from Occupy Wall Street in 2011, to the #Fightfor15 and a Union, to Black Lives Matter, the 2017 Women’s March and more recent fights to defend abortion rights, LGBTQ equality struggles, and a new rising militancy in the labor movement, increasingly led by young workers.

The small-d democratic and socialist-oriented electoral struggles that supported Bernie Sanders, AOC, and Stacey Abrams are a part of that mass democratic movement, too. 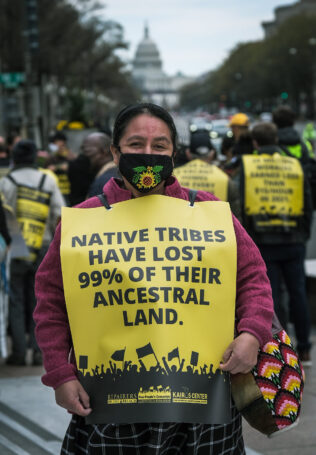 The Poor People’s Campaign is working to bring many of these strands together in the nation’s capital on June 18, while pointing toward the November elections.

“I’ve been really excited about how many people are cross-pollinating,” Zillah Wesley told People’s World. Wesley is co-chair of the local Poor Peoples’ Campaign in D.C. “One lady came canvassing, coming through WAND (Women’s Action for New Directions), and was surprised by the outpouring of support. You can tell people are really feeling this.”

“[The campaign] really highlights D.C. statehood, that’s why I really vibe with it. We can’t afford to live here, you have to make $31 an hour to survive. The mayor keeps closing off the parks, and the unhoused are getting kicked out.”

Wesley listed off some of the grassroots support. “Homeworkers, healthcare workers, some of the people who work in local restaurants.” Servers and barbacks involved with One Fair Wage are part of the D.C. campaign. Various churches and synagogues are in the mix, as is the Brooklyn Manor Tenants’ Association. “It’s really warming my heart,” Wesley says.

To build support, the D.C. Poor People’s Campaign has been utilizing everything from canvassing and flyering to putting up yard signs to happy hours, even having a float in the Pride parade. A memorial service was held at the Lincoln Memorial “for all the people we lost during COVID because of this jacked-up healthcare system,” Wesley said. “I lost about 40 people, either close friends or family.”

The D.C. campaign is also playing a big role as hosts for the thousands descending on the city, serving dinners and breakfasts, and helping to arrange for accommodations. “All roads lead to here, so we’re trying to give an extravagant welcome.”

“We’re all impacted by the decisions that are made legislatively,” CPUSA co-chair Rossana Cambron explained, regarding the importance of taking these fights to Washington.

“The struggle to end poverty, cut the military budget, end institutionalized racism, the struggle for the environment, and resisting the moral narrative of the evangelicals—all of those things affect people. That’s why it’s key to join forces from the different areas around the country to bring the necessary change that we’re looking for.”

Next Article WFTU Solidarity Statement with the farmers in Colombia