How to avoid the mother of all recessions

The financial markets shook in April as the Federal Reserve announced that the United States Gross Domestic Product (GDP) had shrunk in the past quarter by 1.4%. Economists began to fret about the possibility of recession. Strictly speaking, the contraction (shrinking) of the economy over two quarters signals the beginning of a recession.

Concerns about inflation justified the Federal Reserve’s increasing interest rates during 2022, which raised debt-servicing payments across the country and left less money in people’s pockets. After all, if bourgeois, pro-capitalist economists are correct, then inflation is simply caused by too much money in the economy. Therefore, if more of it flies out of working-class pockets and into the coffers of Big Business, inflation should go down, as there will be less money floating around in the economy. Prices across the board should, so the bourgeois economists tell us, decline simply because not enough people are able to afford goods and services.

This brings us back to our previous examination of inflation as deferred class conflict. If the purpose and drive of capitalism is to extract the maximum amount of value from the working class, then capitalists will raise prices when workers have a bit more money in their pockets to stimulate the artificial scarcity of goods and services, as well as to increase labor discipline; workers with a bit more money in their pockets are more likely to tell rotten bosses to jump in a lake, and the boss class doesn’t like that very much at all.

So, at the bidding of banks and lenders, the Federal Reserve has again raised the federal interest rate. This has understandably triggered a contraction in the economy. Workers are now forced to hand over more of their cash to banks, landlords, credit card companies, and student loan providers. So, what’s the possible benefit of such an arrangement for the working class? 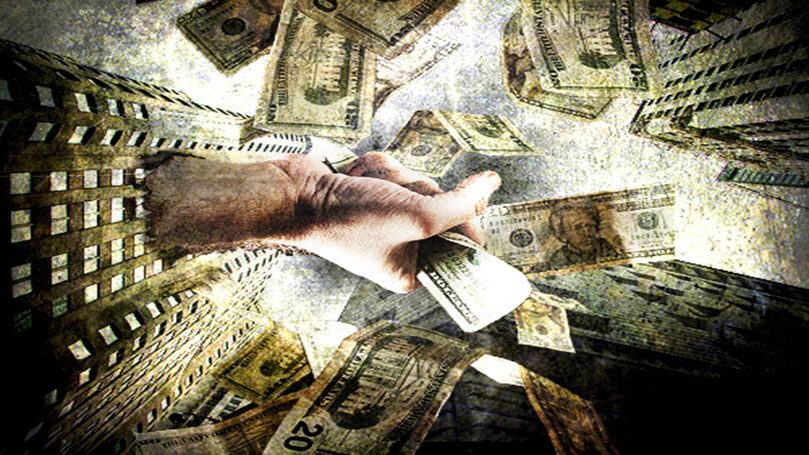 While the price of gas may have stabilized in some areas, thanks to yet another handout to Big Oil in the form of various gas tax holidays, other prices have gone up anyway. With mortgage payments due again, rent freezes long passed, and interest rates going back up, banks and landlords are scrambling to recoup some of the money they lost during the pandemic. More money flies out of the pockets of the working class and back to banks in the form of debt servicing payments, and this is somehow good for the economy because it lowers inflation. Workers have less money to spend on productive economic activity (buying goods and services) and instead hand (yet more of) their money over to Wall Street. This causes an economic slowdown, also called a recession, which is a sign of a sick economy.

We cannot become confused by this talk about money supply and prices – what we demand is universal, high quality, and free-of-cost housing, healthcare, education, food, utilities, and all other essentials needed to sustain human life. The working class demands nothing less than what it is we create every day through our labor. We demand that which the capitalists steal at whim, backed by an army of police and an entire bourgeois support system that demands we go back to work and settle for less because of a pandemic they are in no small part responsible for.

For the youth of the U.S., the fruits of our labor were stolen before we even set foot in the labor market. Two trillion dollars of outstanding student debt hangs over the heads of generations, thwarting healthy growth not just in the present economy, but for decades to come. For communities of color, the debt burden is disproportionate. Because of wealth disparities, greater numbers of African American and Latino students borrow for college than white students.

What’s the reasoning behind the thinking that curbing inflation through austerity will help avoid a recession? Simply the myth that the origin of societal wealth springs from the bourgeoisie and the ultra-rich. It is a revisiting of Reagan’s bankrupt “trickle-down economics” – if the rich have more money in their pockets, they’re somehow more likely to drop a dollar on a homeless man and call it progress.

In reality, in a recession, a poor family is more likely to spend a dollar than a rich one. The poor cannot afford to hoard their wages. For example: in the United States, one in four renters pays more than 50% of their income to rent, and around half of all renters pay at least 30%. Since 2017, the cost of rent rose nearly 20% across the country, greatly outpacing inflation. 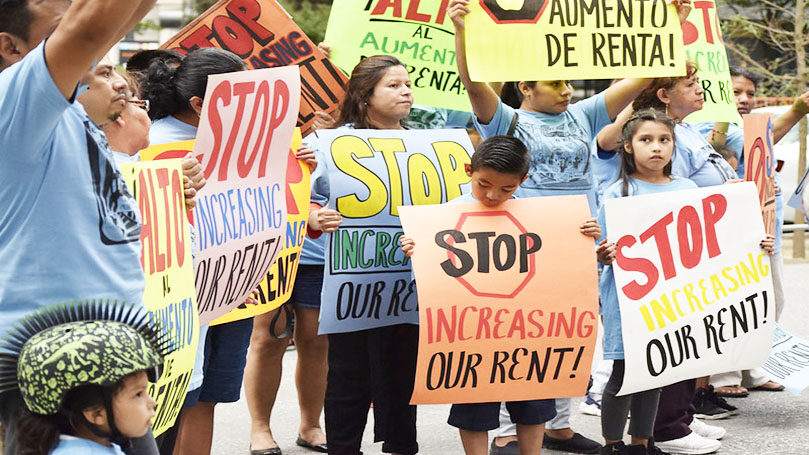 The United States is a country wherein the national myth of class mobility, wealth, and the “American Dream” are built on homeownership. Only about 35% of households in the United States are renters, but this number is on the rise alongside skyrocketing housing prices, in no small part stimulated by Wall Street’s snapping up houses in cash to convert them into rentals. The economic history of the United States is one of racist and sexist economic inequality. These numbers are reflected in both historic and present homeownership rates.

To add to these historic injustices, the current economic reality is that the young are also less likely to economically advance. This is also reflected in owner-vs-renter housing rates, where only 54% of homeowners are under the age of 45.

These renters hand over more than $350 billion of their wages every year to landlords, who can choose to either consume it through their own housing, food, and consumer spending costs, or to reinvest it in their own property holdings, whether through renovation or through buying up new properties, thereby pushing more households into rental units.

A similar story exists with both education and health care. In 2022, 20% of the country’s GDP was spent on health care, which is equivalent to around $4.2 trillion. Government spending on education accounts for a smaller portion of the US GDP (4.9%) but with student loans outstanding at nearly $2T, this represents another sizeable expenditure for US workers, nearly half of what we spend on healthcare annually.

In short: the working class increasingly cannot afford to save or invest our wages because we have less and less of them. The bosses are unable to provide us with jobs that meet our human needs, because they are scrambling to out-compete one another. If our jobs are focused less on production (manufacturing) and more on consumption (services), the focus of economic growth will be increasingly in the form of issuing debt and appealing to an ever-shrinking class of consumers who can still afford to go shopping. This, in turn, triggers further decline in our standards of living, as well as increasing tensions between different sections of the capitalist class.

The economy is trapped in a downward spiral, with the rich getting richer at the exponential expense of the poor. The only way out seems to be immediate and drastic state intervention. The author’s modest proposal is simple, and requires only a stroke of the presidential pen: abolish all federally held student debt immediately. 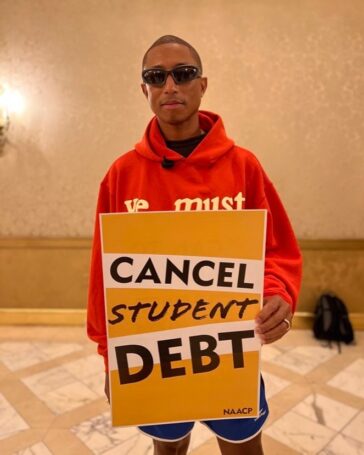 The release of millions of youth from trillions in outstanding debt would have an immediate benefit for not just the economy, but for the Democratic Party as well. Having borrowed trillions to gain an education, workers can now focus on bringing their full potential to the fore instead of living hand to mouth. We could buy houses, raise families, and engage in more economically beneficial activities such as buying products, spending time (and money) with family and friends, and asserting our rights as workers on the job.

Instead of settling for degrading and low-paid jobs that barely meet our needs, we could put our collective efforts to work by addressing the climate crisis, the pandemic, as well as police violence and mass incarceration. Does this seem radical? Of course it does. You’re reading about it on the Communist Party website! But, if the U.S. hopes to escape this economic quicksand, radical action is precisely what’s needed at this juncture. We need to unleash the potential of the working class by breaking the chains of debt and incarceration, and we can only achieve this through the force of a united working class brought to bear on Big Business and the politicians in DC.

Joe Biden has already been pressured to think outside the box by an emerging working-class revival. Representatives from the Amazon Labor Union and Workers United recently met with both the President and Vice President on the importance of supporting workers rights. Elon Musk and Jeff Bezos will be cutting the checks come this election season, but workers — especially organized labor — are the ones who knock on doors to get politicians elected. We are the ones who not only create all value, but also cast ballots and pay taxes — and we are far more in number than the scrawny billionaire class. With racist massacres unleashed by the advertisers and pundits at Fox News fretting about demographic shifts, with Covid cases climbing higher and killing and disabling more of us, and now even more money stolen from our pockets to pay for our basic needs — we, the working class, literally cannot afford to wait any longer for economic relief. Biden and his administration would do well to remember this as they head into the midterm elections.

The opinions of the author do not necessarily reflect the positions of the CPUSA. 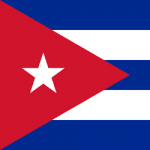 Next Article Regional Trade Union of Larisa expresses its solidarity with the Roofers Local 36 of Los Angeles, USA, the workers and the unionist Cliff Smith