Democracy is on the line in November

The following is adapted from a talk given at the online Marxist School in 2022.

People’s life experience has a decisive influence on their reaction to events. But it is not always determinative.

Someone influenced by progressive class-struggle ideas, racial and gender equality, and generally by mass democratic movements and who gains a relative level of class and democratic consciousness will likely react one way. But someone largely swayed by ruling-class ideas, who is captive to Fox News lies and propaganda, will respond another way.

The ruling class skillfully hijacks workers’ anger, insecurity, or fears and diverts blame for their living conditions by scapegoating or injecting ideological hate and other poisons. One example is how they manipulate many white workers with racism and disrupt multi-racial working-class unity or even prevent its development.

The extreme right has manipulated the fears of millions of white working people regarding the country’s changing demographics, ethics, and culture to build support for an authoritarian/fascist movement that seeks to impose white patriarchical Christian minority rule and radically roll back rights. This summer’s U.S. Supreme Court rulings signal this direction.

Most people have a mixture of influences and wrestle with competing ideas. We are, after all, subject to the battle of ideas from sunup to sundown. It is possible for people to be of multiple minds.

Are we in a new qualitative moment, where people’s thinking is shifting quickly?

But a mass democratic upsurge can have a powerful effect. People can be swept up in actual events and change how they see life. Are we in a new qualitative moment, when people’s thinking is shifting quickly, millions are in motion, and activity and initiative, including self-initiative, are in the air? 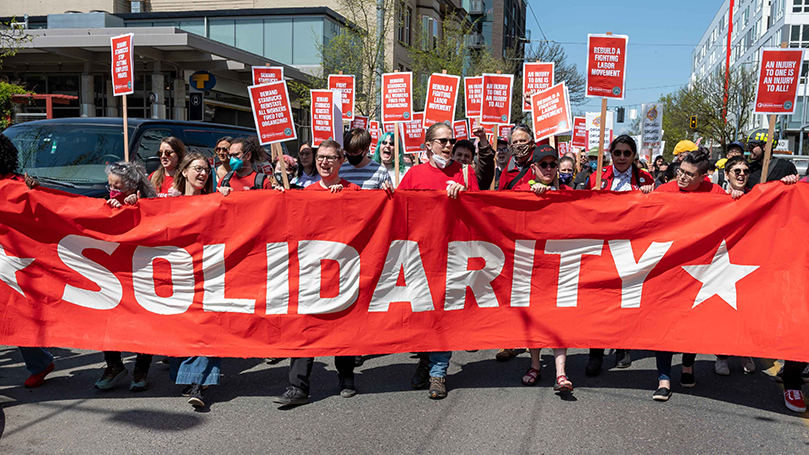 Concerning organized labor, we are entering such a moment and, from all indications, one not seen in the country since the 1940s. The experience of forming a union in the face of all-out corporate resistance can accelerate the development of class and democratic consciousness and impact political and democratic developments nationally. Think what it would mean if the organized labor movement were two or three times larger, especially in so-called red states.

The pro-union upsurge is in the early stages and is bound to encounter greater resistance. And the prospects of future growth are tied to this movement’s ability to defend its gains against a coming corporate backlash. Let the abortion ban by SCOTUS be a warning. The radical right-wing majority in the Court are moving swiftly to roll back rights across the board, including labor rights. The multi-racial working-class and mass democratic movements are not driving overall events because the country’s class and political balance of forces have not yet shifted decisively. The mass democratic movements must be much bigger and more united for this to occur.

But still, this process is happening at the workplace and with other issues affecting the working class. Let’s take environmental justice issues. Most people see the destructive role of corporations on the planet and the ecology in their daily lives, communities, and workplaces. The thinking of millions, Democrats, Republicans, independents, and socialists, and those living in so-called red states and blue states, has changed dramatically because of direct experience with extreme weather events, heat, floods, wildfires, and droughts that only worsen.

And if you work in or live near a coal mine, an oil refinery, or a toxic waste dump, you are affected directly. You or your family may suffer from respiratory diseases or cancer. You are more likely to face these conditions and outcomes as a person of color or a low-income worker.

Millions are becoming change agents due to the existential nature of the crisis or are influenced by the local, national, and global environmental movements. 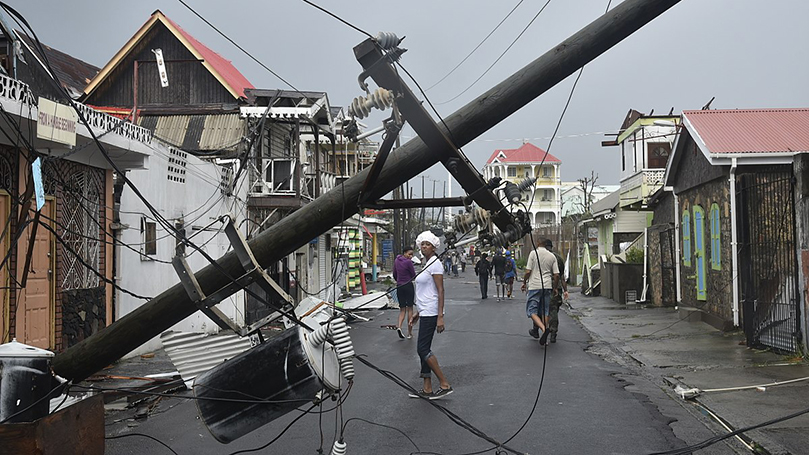 Millions are increasingly fearful of a dystopian future. They see the giant fossil fuel corporations as the chief culprit and obstacle to addressing the existential climate and ecological crisis. They understand how these corporations have corrupted the political system, financed science denialism and the extreme right, and corrupted some Democratic elected officials.

Yet many workers fear job loss or an unknown future in a transition to a green economy. They believe the company and right-wing propaganda or are jaded from past promises of training or new jobs that didn’t pan out.

But the material reality, including market forces, challenges workers’ fears and corporate misinformation. Despite Trump’s demagogic campaign around reviving the coal industry, production continued to decline. The announcement by the United Mine Workers of America last year recognizing the reality of climate change and the need for a green transition is a significant development.

Even in the face of right-wing and ruling-class propaganda, people increasingly associate these corporations with a more extensive system of global capitalism. Just like the concentration of wealth, the mass destruction of the environment has accelerated the development of an anti-capitalist worldview. People are increasingly drawing the connections between environmental destruction, racism, gender-based hate, and labor exploitation. They are enraged that companies put profits over the planet and reap record profits through price gouging during a global crisis.

If you conclude the problems are systemic, you naturally look for an alternative system, and this is reflected in the 40% (or more) who think socialism, however they envision it, is a fairer, more humane, and eco-friendly economic and social system. Most define socialism as a European-style social democracy and know that education and health care are free in those countries. Why not here, they ask, especially with so many in debt, without health care, and doors shut to advancement?

We live in an era of concerted assault on the environment and our multi-racial pluralistic democracy, waged by the most reactionary sections of the ruling class and their allied movements centered on finance capital, fossil fuel corporations, the military industrial complex, and the gun industry. The same forces are leading the cutting-edge assault in all areas. 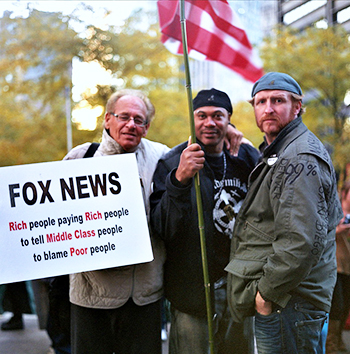 Marxists carefully study ruling-class dynamics, identify the most reactionary sectors, and seek to take advantage of splits. The U.S. ruling class is fractured, but it is the most reactionary sector that is on the rise, signaled by the January 6 insurrection. It is funding far-right and neo-fascist movements, fascist militias, and Trump and other neo-fascist candidates; vetting and backing extreme-right justices to the Courts; waging electoral campaigns to take over local school boards; and supporting , right-wing think tanks and a vast media/propaganda ecosystem.

Many tech companies, notably Meta/Facebook, are objectively part of the extreme right. Elon Musk intends to unleash the Trump beast against the growing democratic movement by attempting to acquire Twitter.

The concentration of wealth has reached such an obscene level that only a few billionaires control half of all wealth. A few individuals and corporations dominate industries globally.

Every community feels the impact of corporate concentration and power. Millions work directly or indirectly for Starbucks, Amazon warehouses, big-box retail stores, grocery chains under various logos, fast food franchises, etc. The food we eat and information we consume is distributed by a few corporations.

Monopolization extends to every industry and sector. For example, housing stock is being bought up and concentrated by Wall Street hedge funds, restricting supply and imposing monopoly prices on housing and rents. 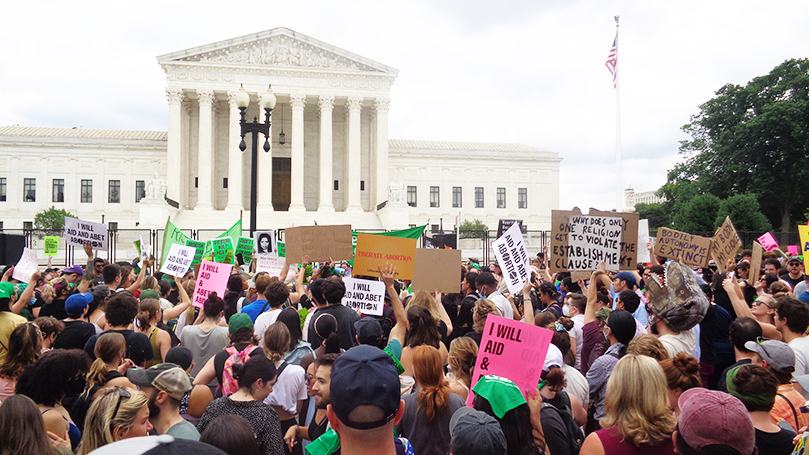 Capitalist development tends toward the concentration of wealth and political power and, therefore, toward reaction. The rise of the extreme right and fascism in politics and the erosion of democratic rights, especially in “red” states, the corruption of democratic institutions like the U.S. Supreme Court, and its loss of legitimacy, exemplify this trend.

The extreme right, and the sections of the U.S. ruling class they represent, have been determined for the past 50 years to undo the New Deal, civil rights laws, and other social gains and to impose an authoritarian type of minority rule by any means necessary.

But the mass democratic movement has grown in opposition to the extreme right, reflecting an evolving democratic, multi-racial working-class culture fighting to defend and expand the democratic sphere. 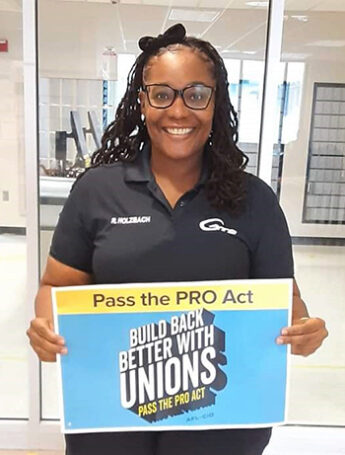 This mass democratic movement has won significant gains recently, including the 2018 and 2020 elections, the presidency, Congress, governorships, state legislatures, city governments, etc. Elections matter when it comes to exercising the levers of governmental power. What could be more explicit than the Biden meeting in the White House with young labor organizers and Democratic support for the PRO Act? Or the tsunami of progressive legislation in many “blue” states?

The 2020 outcome, while historic, resulted in a very narrow majority in Congress, limited by wavering and conservative Democratic senators who oppose the progressive agenda and refuse to do away with the filibuster. Entrenched right-wing control in half the states, a right-wing theocratic majority on the SCOTUS, the use of violence by fascist militias, and a powerful right-wing propaganda machine all limit progress. While the new balance of forces has stalled the assault on some fronts, it is insufficient to block the erosion of rights and democratic institutions in other areas, especially in states where the right dominates.

The right-wing backlash to the 2020 victory has been enormous, beginning with the Jan. 6 insurrection and the Big Lie that the election was illegitimate. GOP state legislatures have passed voter suppression and election subversion laws, outlawed free speech, banned books, and attacked LGTBQ and trans rights. The GOP theocratic SCOTUS majority and right-dominated district courts are legislating through “shadow dockets” and repealing rights. The right-wing is also turning to violent force to impose its will.

A backlash is taking shape against the rising union movement. The right-wing will use the courts and whatever positions of power it gains in Congress and the presidency to crush it, including violence. Defending this narrow democratic space by defeating right-wing candidates in 2022 and 2024 is critical to the future of labor and democratic movements.

Nevertheless, the 2020 victory expanded the space for struggle and opportunities for progress, unionizing, and advancing equality and environmental justice. Currently, federal agencies are employed on the side of workers’ and civil rights and ecological justice despite the obstacles. 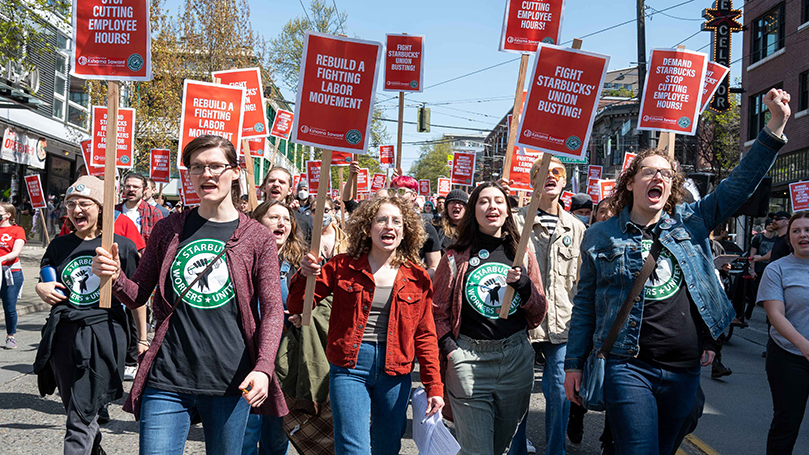 For example, the Biden administration is restoring the NLRB to its original purpose. The result is a far friendlier agency that issued over 200 unfair labor practice violations against Starbucks in May 2022.  The Labor Department established a committee to facilitate union organizing.

The same has happened with the EPA, formerly dominated by fossil fuel interests under Trump. Now the EPA and administration work in collaboration with environmental groups, despite the political limitations from the unfavorable balance of forces in Congress and the Courts.

How could advances and setbacks be happening simultaneously? Because the victory is not decisive, not big enough to isolate and crush the anti-democratic and fascist threat and repel the backlash by reactionary forces. Upcoming battles, especially electoral battles, will determine the extent of the democratic space, what the working class and its allies can do, and its conditions of existence.

The labor and democratic movements need to elect more pro-labor, anti-racist, pro-abortion, and pro–gun control candidates in 2022 and beyond, including enough committed to breaking the Senate filibuster to defend its victories and shift the balance of forces further in a progressive direction to open the field of battle and shift public opinion.

The Special House Select Committee on the Jan. 6 Insurrection showed how close the country came to a successful fascist coup in 2021. But the hearings also show how fragile our democracy is and that the danger has not passed. The GOP is moving swiftly to subvert elections and suppress the vote to ensure they are successful next time.

The critical dividing line in politics today is the defense of Constitutional democracy, the peaceful transfer of power, and the rule of law. The multi-racial working-class and other democratic forces can build the broadest front based on this issue, which encompasses most Americans. Mobilizing this majority to the polls in November 2022 and 2024 to oust the GOP insurrectionists and replace them with pro-labor, pro-people elected officials is the essential task of every communist, socialist, working-class partisan, anti-fascist, and social justice activist.