Abortion is legal today. And likely even tomorrow. And next week.

But when the Supreme Court publishes its decision to reverse Roe v. Wade, a decision apparently made in February but leaked on May 3 to Politico, women will no longer have the reproductive rights they fought so hard for.

Let’s be clear. Poor and working-class women — especially women of color — and their families will bear the brunt of the decision. This decision continues the war on women and intensifies the war on the working class.

This decision is an attack on working-class women, but it affects all women, and in myriad ways. Women have historically sacrificed their livelihoods for the nuclear family. They have played gendered roles as caregiver of their children and partners and as household manager. These roles serve to support the capitalist economy. To deny women abortion rights is to deny them bodily autonomy and economic independence.

While women in other countries are gaining reproductive freedom, the U.S. is going backward. Even Latin American countries that have been staunchly anti-abortion are making progress, with Colombia, Argentina, and Mexico moving forward in recent years on abortion rights. But here in the U.S., we have a court packed with justices who will “stop at nothing ‘to control our bodies and drag this country into the Dark Ages,’” according to Jennifer Driver, the senior director of reproductive rights at the State Innovation Exchange.

The Court’s decision was based in part on the originalist theory of the Constitution, which basically holds that if it ain’t in the Constitution, it ain’t so. Alito writes: “We hold that Roe and Casey must be overruled. The Constitution makes no reference to abortion, and no such right is implicitly protected by any constitutional provision . . .”

Referring to the Due Process Clause of the 14th Amendment on which Roe was based, Alito writes: “That provision has been held to guarantee some rights that are not mentioned in the Constitution, but any such right must be ‘deeply rooted in this Nation’s history and tradition’ and ‘implicit in the concept of ordered Liberty’” (citing Washington v. Glucksberg, 1997).

He continues: “The right to abortion does not fall within this category. Until the latter part of the 20th century, such a right was entirely unknown in American law. Indeed, when the Fourteenth Amendment was adopted, three quarters of the States made abortion a crime at all stages of pregnancy.”

To put it another way: Since the right to an abortion was not a topic at the 1787 Constitutional Convention, it is not protected by the Constitution.

This “reasoning” should give us pause. It’s alarming because voting rights for African Americans are not part of this tradition. Neither is gay marriage. The right to organize a union. The right for women to hold property. The right for girls to compete in sports. And so many other rights that we fought for and won.

Sure, as long ago as 1870, the 15th Amendment ensuring that voting rights would not be denied based on “race, color, or previous condition of servitude” was ratified. A 152-year-old amendment sounds like tradition. But 1965 is not so long ago. That’s the year the Voting Rights Act was passed, removing barriers to voting like poll taxes and literacy tests. Until 1965, most African Americans could not vote, especially in the South. Does an 80-year-old Black person in Alabama feel like their voting rights are “deeply rooted in this Nation’s history and tradition”?

That the Court deems a civil right must be rooted in “history and tradition” in order for the Due Process Clause to apply means this: the Far Right is gunning for you. They’re taking away a woman’s right to choose. What’s next?

The Court’s decision essentially kicked the abortion rights issue back to the states. This means that a woman’s right to choose is determined by what state she lives in. The Medicaid expansion worked that way, too. When the Supreme Court struck down a provision of the American Care Act that required states to expand Medicaid coverage to more low-income people, some states decided not to expand health-care coverage. As of 2022, 12 states have not expanded Medicaid. So, if you live in Mississippi and don’t meet the income threshold, tough luck. If you live in a state that banned abortion, the same thing goes. A right that women have had the option to exercise for 49 years will disappear overnight in many states.

Why should civil rights and human rights stop at the border of the state you live in? 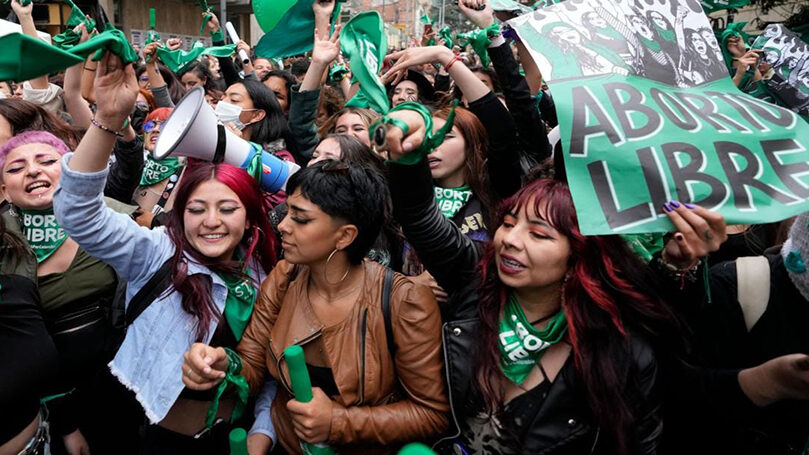 The anti-abortion movement got what they want. They sanctimoniously profess to love life. To those who want to force women to carry pregnancies to term, we ask: Where is your love of life when it comes to preventing gun violence, wars, starvation, substance abuse, and homelessness? We know the answer to that one.

And what about their corporate and political right-wing backers? Do they love life? Not really. They love power and profit. They use controversial issues like abortion rights to gin up their base during elections and get them to vote for the likes of Trump, DeSantis, Hawley, and other fascist-minded white supremacists. Not so that the corporate-backed “public servants” can ban abortion but so they can cut taxes for the rich and corporations, deregulate and privatize, and give corporate polluters permission to drill, mine, and pollute.

The Supreme Court decision puts pressure on Congress to act. Last year the House passed a bill ensuring abortion rights. But the Senate is another animal. Although two Republican senators, Susan Collins of Maine and Lisa Murkowski of Alaska, support abortion rights, it’s not clear if they will support an end to the filibuster to push through the Women’s Health Protection Act. And of course, Democratic senators Joe Manchin of West Virginia and Kristen Sinema of Arizona are opposed to dumping the filibuster, even to pass abortion-rights legislation.

So, what to do? Our job is to make sure that this set-back is temporary. First, we march. On May 3, thousands hit the streets in front of federal courthouses demanding reproductive rights for women. More marches are planned for the coming days and months. Marching is not enough; we must build a broad, inclusive, massive movement that reflects the fact that most Americans support the right to choose. In January 2017, women rose up and demonstrated in huge numbers in D.C. and around the country to protest Trump’s election. Then they engaged in electoral struggles and helped take the House away from the GOP in 2018. In 2022 we need a “rise up” on that scale, and even larger, to win reproductive justice for all women.

So it’s up to the American people. (When has it not been so?) To struggle on two fronts: the grassroots, where we must show up in massive demonstrations, sit in at senators’ offices, and engage in nonviolent disobedience; and in the political arena, where we must lobby the Senate and elect more progressive senators who understand the necessity for abortion rights. Success requires a mass movement.

Let the work of building that movement begin.

What’s at stake in the settler colonial debate