The following speech was presented by United Nations Cuba Ambassador Yuri Gala López on Nov. 3, 2022, at the Henry Winston Unity Hall in New York City, where the documentary Cuba in Africa by Negash Abdurahman was also shown.

Good evening. First of all let me start by thanking the organizers of this special event. Let me also express deep appreciation to you all for being here this evening. I think this is important, and these activities are taking place at a very symbolic moment for Cubans, for those that love Cuba, and to those that support Cuba as well. I’m very honored to be representing the permanent mission of Cuba to the United Nations tonight. Every time we see that documentary, for Cubans, it triggers a lot of memories and a lot of special ideas related to the kind of relationships that we have had with Africa. In the last part of the documentary one of the speakers said a phrase, which I think captures one of the essences of this documentary. It is “Eternal glory to those that passed away, who died, during those 26 years of battle and conviction with the African brothers and sisters.” So eternal glory to all.

Let me also mention that when I said it was a very important and symbolic moment, it is because tomorrow at the United Nations Assembly, we’re going to have a vote on the traditional resolution, presented by Cuba, demanding to put an end to the six-decade-old blockade on Cuba. This will be the 30th time in a row that we will be presenting and adopting such an important resolution for Cuba, for the United States, and for the trend of people in the United States who are supporting this cause. It will be 30 years of this moral battle at the United Nations and we’re extremely confident that once again, the international community will express support over the draft resolution that Cuba will be presenting and to show the world that Cuba is not alone. Let me start by expressing a number of ideas engaged with the relationship we’ve had with the African continent for a number of years.

Cuba’s fraternal links with Africa are an essential part of our history, cemented in deep cultural roots that stem from the shameful enslavement of more than 1 million human beings who were forcibly uprooted from their national environment in Africa. It is not possible to speak about the links with Africa without mentioning the historic leader of the Cuban revolution, Fidel Castro Ruiz. Fidel turned solidarity with other people into an important attribute of the revolution and taught that the struggle for social justice has no borders. Allow me to quote an idea expressed by Fidel, he said, “Without Africa, without its sons and daughters, without its culture and customs, without its languages and thoughts, Cuba would not be what it is today. The Cuban people therefore owe a debt to Africa that is increased by the heroic history we’ve had here.” Fidel always highlighted that beauty that we Cubans have with Africa. For the crucial role played by Africans and their descendants in the independence war of our country and their contribution to the construction of this Caribbean nation, Cuba. 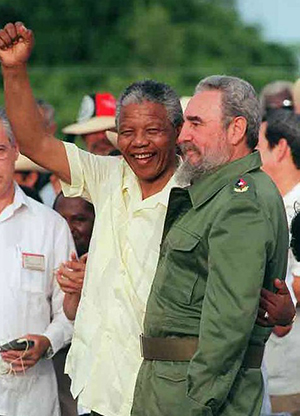 Since the tale of revolution in 1959, Cuba has practiced consistent internationalism, being loyal to its principles of solidarity towards its African brothers and sisters. Solidarity with Africa became a priority for Cuba. Raul Castro Cruz once stated, and I quote, “Cuba, which carries African blood in its veins, emerged from the struggle for independence and for the abolition of slavery, and subsequently, has had the privilege of fighting and building our own outside African nations.”

It should be recalled, and during the documentary it was already highlighted, that over 380,000 Cubans went to Africa to help in the fight against colonialism. More than 2,000 of them paid the supreme sacrifice of their lives, and we pay due tribute and express eternal glory to them. When I was looking at those figures, I was actually trying to do the math, in terms of the ratio to the Cuban population at the time; let’s assume at that time the population of Cuba was 11,000,000 inhabitants. So when you actually say that over 300,000 or 400,000 people went to Africa during that period of time of 26 years, . . . close to 5% of the Cuban population was somehow involved in the defense and promotion of independence in the African continent. That is said [of] an island which is only 90 miles off of the United States. So when they said that all the military aircraft of Cuba was sent to Angola, to actually get involved in the fight, one has to analyze that that was an important and difficult moment for Cuba as well. Because when we actually did that we were not having a normal relationship with the United States; we were in a very difficult situation with the United States. Yet, Cuba . . . sent those troops and personnel to the African continent — [including] military gear, equipment — without thinking much [about] whether that should remain in our territory for our own self-defense.

That was an important and moral step, an expression of internationalism, so that our African brothers and sisters could have that kind of support. We are proud of that. It was a humble contribution but a contribution we will never forget because of the impact it has, not only for the countries that either retained or gained independence, but also for our own population. Because at the end of the day I think that the kind of involvement that we had, that show of internationalism so far from our shores was also an important lesson and educational work for our own population. Those who went down to Africa and returned [shared] a lot of stories and  were proud of being part of that important and historic moment for the African continent.

This year, in March of 2022, we marked the 34th anniversary of the victory in the Battle of Cuito Cuanavale, which was mentioned here. It was not the decisive strike but it was the jab, as somebody mentioned. That became a milestone in the history and political life of the continent. For it is a decisive contribution to the independence of Angola and the overthrow of the racist apartheid regime in South Africa. The nation, South Africa, of the beloved and enduring Nelson Mandela, will forever be a symbol of honor and dignity of this continent. Throughout all these years hundreds of thousands of Cuban professionals have rendered their services in Africa, in areas such as healthcare, education, construction, sports, agriculture, and many others. African leaders and people appreciate Fidel, the brother, the man who unconditionally promoted independence from colonialism and provided support for the social development of the people in that continent.

I want to also highlight something that was mentioned in the documentary: we sent more than 300,000 people to Africa, more than 2,000 died, but you will not find industries in Africa owned by Cuba. This was not the idea, and this was never the idea. The only thing we actually took from Africa was the remains of those that had died in the process, and those remains were returned back to Cuba. Those are the things we brought back from Africa, and we are proud of that. We’re not only doing that in the African continent but in other countries in the world, in the Caribbean, in Latin America, in Asia. So Cuba has been there, in some places helping them to fight against invaders, but we will never go to a place to take over important national resources. That is the kind of internationalism that we have been practicing because we were also receivers of internationalism; we’re also giving back to others in need of help.

Since the triumph of the Cuban revolution, we have lent our unconditional support to Africa. In Cuba more than 30,000 African students have graduated from various specialties, out of which 29,000 belong to the sub-Saharan African region. Nearly 9,000 African scholars are pursuing higher education studies in our country under different modalities. Bilateral cooperation between Cuba and African countries continues to strengthen and diversify. Today, we have cooperation projects in nearly all African countries. As of last year, around 6,000 Cuban professionals in various fields, such as health, education, sports, agriculture, have provided their services in more than 30 African countries. Cuba has cooperated with Africa in the fight against disasters and diseases, including in the combat against epidemics such as Ebola and more recently against the COVID-19 pandemic.

Africa continues to be a priority for Cuba’s foreign policy, and our relations with that continent is one of continuity, mutual benefit, and commitment to history. Havana is one of the world’s capitals with the largest number of African diplomatic representations, with 27 [making] up a very active diplomatic court. Likewise Cuba is one of the best represented nations in the African continent with 34 embassies in that continent. Africa is a decisive actor in international affairs; its member states make up one-third of the United Nations General Assembly, and half in other forms of global concentrations such as the Non-Aligned movement and the G77 plus China.

Today during the first session of the debate on the traditional resolution against the blockade, we saw a number of African countries represented.. The African group made a powerful statement against the U.S. blockade, but other ambassadors and permanent representatives from a number of African countries took to the floor to make their moral contributions to these sessions, these debates. . . . We appreciate the unanimous support of the government leaders, organizations, and peoples of Africa, in the struggle against the blockade imposed by the U.S., including the traditional vote for the resolution. We value this long-standing and genuine solidarity, especially now when Cuba is facing the cruel impact of the longest and most comprehensive system of unilateral coercive measures, which we call the blockade. Not embargo. 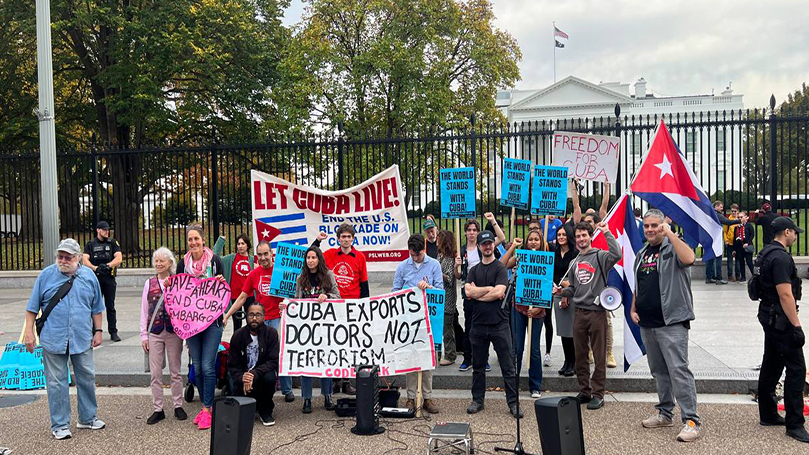 We continue to be a resilient nation with a worthy people, in spite of the tightened blockade and de-relaxation operations [reversal of Obama’s policies] orchestrated by the U.S. Cuba is and continues to be the first country in Latin America and the Caribbean with three vaccines of its own in the fight against COVID-19.  We were the first country in the world which started and carried out a mass vaccination campaign for the pediatric population. In our case we did that campaign for kids two years old and older. Today all the pediatric population of Cuba is fully vaccinated. Cuba continues to renew its friendship and fraternity with the brother continent to which we were united by bonds of blood, culture, and history. Cuba has prestige in Africa for its contributions to the struggles for independence and sovereignty of African nations and in favor of development.

In closing, let me reaffirm an idea expressed by the Cuban president Miguel Diaz Canal. I quote, “The relationship between Africa and Cuba is as profound as it is indestructible, it is the very genesis of our nation.” And certainly, loyal to our historical and solidarity tradition, we will continue to enhance the friendly and competitive ties with that continent in the best interest of our people. Africa can always count on Cuba. Long live the brotherhood between Cuba and Africa! Long live the solidarity movement between Cuba and the United States!

Ambassador López was hosted by the New York-New Jersey Cuba Sí Coalition, the US-Cuba Normalization Committee, and the NY District of the CPUSA. Read about the Nov. 3rd event here.

Next Article Contribution of the Tudeh Party of Iran to the 22nd IMCWP 27-29 October 2022 – Havana, Cuba